Pioneer Tower to be renamed

Donald Trump offers UW-Platteville a donation of $5 milllion, under a few conditions. Pioneer Tower to become Trump Tower and $10 will go to each student who votes for him. 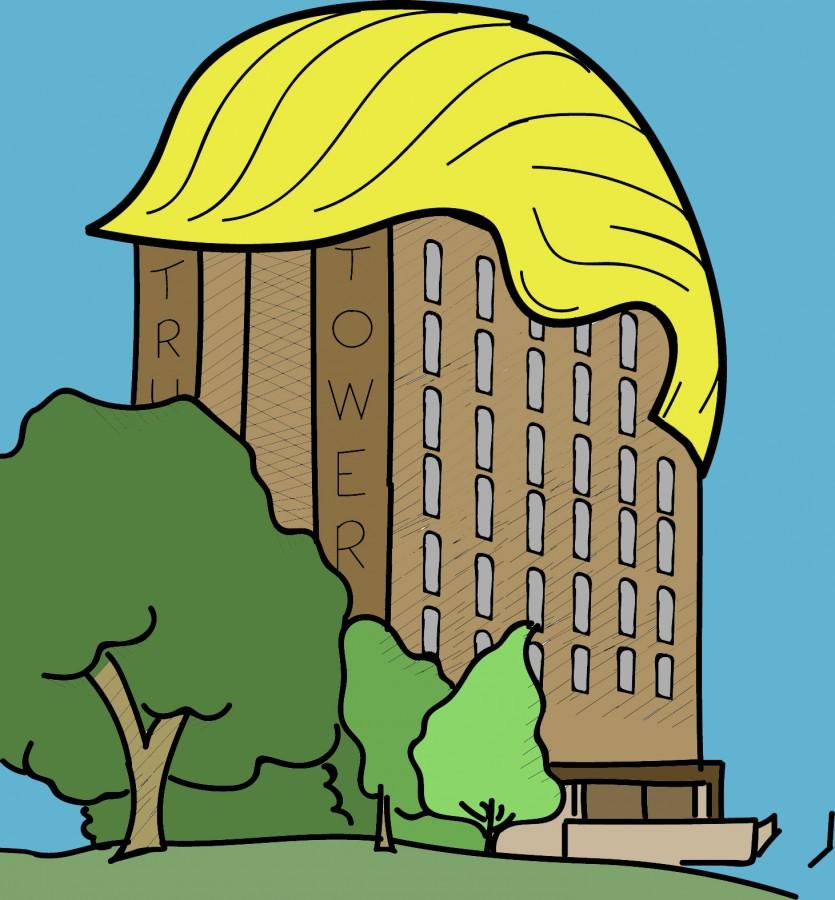 Newly renamed Trump Tower gets a Donald Trump makeover. A toupee is one of the additions, which will help to model the tower after its benefactor. Trump chose to renovate the tower over other buildings due to its size and it’s iconicness to UW-Platteville.

On March 28, 2016 students returned from their Spring Break vacations to an email from Chancellor Dennis Shields entitled “Pioneer Tower to be Renamed.” The email reads as follows:

While spring break was in session, I had a meeting with a good friend of mine, the ever so generous Donald Trump. It is no secret that the university has been greatly affected by the budget cuts happening state-wide, and Donald has taken notice to this. He came to me not only with an open heart, but also a solution.

Donald Trump has agreed to give the university $5 million and in return asks that the Pioneer Tower be changed to “Trump Tower”. He has also agreed to give the university $10 for each student that votes for him. I understand this may oppose student’s individual political beliefs, however, in a time of crisis it is important that we all work together and make sacrifices for the betterment of the University.

Construction on the newly named “Trump Tower” will begin Friday, April 1 and be completed by Monday, April 4. Thank you and remember, everyday is a great day to be a Trumpeter. I mean err…Pioneer.

The student body has mixed thoughts in regards to this email, some finding it sensible and others uncomfortable by Trump’s demands.

“I just can’t believe that I am being asked to sacrifice my political dignity in a clear act of desperation. The university is already half-assing my department, now they expect me to vote for a misogynistic, racist and utterly disappointing political candidate,” said Carl Mueller, senior media studies major.

The media studies department is not the only thing taking a hit due to the unfortunate financial situation.

As a result of the budget cuts many positions have been terminated, some classes will no longer be offered and the athletics department can no longer use coach bus services for away games. These losses have some students agreeing to do just about anything to bring in an extra dollar to the university.

“I think this solution is one of the best proposals I have read, and I’m not saying that just because I am a proud Trump supporter,” said Adam Johnson, junior agribusiness major. “Yeah, Trump can be a little sexist sometimes, and sure maybe even kind of racist, but knowing that my vote will bring in $10- that could solve the budget problem. It makes me much more confident in my decision.”

The renaming of the Pioneer Tower was not Donald Trump’s only request, according to Shields.

During their meeting Trump had made several other demands, and also agreed to pay more money to the university, but according to Shields, these proposals would not have gone over well with the student body.

“I want to do what is best for the university, this has always been and always will be my goal. However, when Donald insisted that we build a wall around our campus and rethink our desire to diversify, I was hesitant,” Shields said.

Shields explained that future university funding will come from Trump and that the two have big plans for the university, however they were not willing to disclose those plans as of right now.

Trump was available for an interview, but said he “did not feel comfortable speaking to a woman over the phone” and would have preferred a sit down conversation so he could “judge the sex appeal of the reporter and determine if she was qualified to write an article on such a powerful and attractive man.”

For more information on how to vote for Trump and raise money for the university, visit misogynist.org. Please remember that every action has consequences.