Been telling all y’all all along that it’d be her, but you guys don’t listen to us 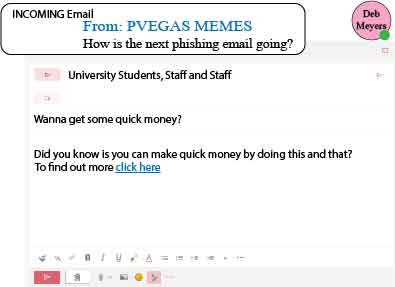 It may seem shocking, but I’m here to tell you that the rumors are true: Deb Meyer, the guardian of the UW-Platteville student email, has been behind the phishing attempts all along.

“She was a true mastermind, leaving no trace, no crumbs, no sense that she could ever have committed these e-ttrocities,” police chief Gull Ible said.

A classified investigation into the phisher behind the email mask launched in the spring of 2019, led by a private investigator who goes by the name of Jo Student.

It was soon discovered that she wasn’t working alone.

“No criminal of this caliber could do this on their own; they had to have a sidekick,” private investigator Student said.

And what better partner in crime than a “student-led meme page?” That’s right, the Instagram meme page that UW-Platteville students have all come to know and love, pvegas_memes, was second-in-command to Deb in this phishing scandal.

“Pvegas_memes played a critical role in this sophisticated scheme. Deb covered her tracks by playing the thoughtful faculty member, but pvegas_memes drew the attention away from her by making the attempts seem funny – the monster,” Ible said.

Jo Student watched his email like a hawk for over six months, closely monitoring every phishing attempt, looking for anything that could tie Deb back to the crime.

“Honestly, it kind of helped my grades, watching my emails like that. Who knew? However, it was still a grueling process, and I wouldn’t wish it on anybody. I am looking forward to ignoring my emails like a normal person again,” Student said.

Meyer had the perfect alibi. Why would the Communications and Training Coordinator for the UW-Platteville Information Technology Services Department  (ITS) make more work for herself? Plus, she herself was a UW-Platteville graduate. What kind of monster would phish her own Alma Mater?

In a 2015,Pioneer Spotlight Interview, reporter Jane Janet asked Deb if she ever expected such notoriety for her campus-wide emails.

Meyer responded, “I did not anticipate it, but I don’t mind it at all. Sometimes in public, people ask me if I am the Deb Meyer from UW-Platteville who sends all the emails. Once, I had a pizza delivered to my house and the delivery person was stunned that I was the ‘real’ Deb Meyer. The fact that people know my name tells me they’re paying attention, which is half the battle in communications.”

“She played the part of a concerned employee so well, we never imagined that she could have been behind all of this. She’s just so sweet – I still can’t believe it. I can’t believe I didn’t see it,” fellow ITS employee Sasha Sasherson said.

So how did they catch the woman and the meme page behind the crime?

Jo Student explained how, in reading each and every email so carefully, he began to track a coded pattern within the names of the “phishers.”

“I started breaking it down and realized that she was telling pvegas_memes which memes to run for each phishing attempt. She is much more than just your average everyday hacker – she is a Meme Lord,” Student said.

Deb is currently being held in the basement of Boebel Hall, which is why the building is off limits.