A perfectly done (and definitely not biased) chicken report 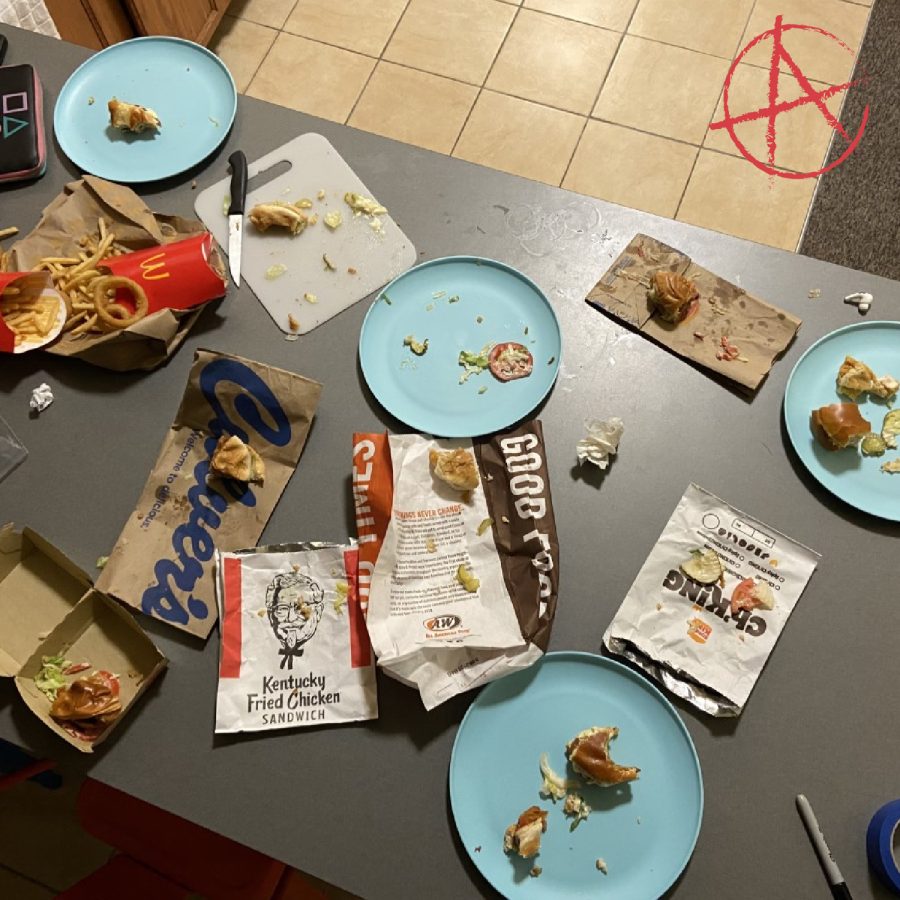 In the beginning there was chicken. In the end there was Pepto Bismol. On Oct. 24, I began and finished collecting data about which fast food chain offered the best chicken sandwich. It was my dream to test my theory about the quality of a bunch of different crispy chicken sandwiches. I just needed an excuse to do it.

I managed to connect with Elizabeth Dustman, Social Media and Web Editor of the Exponent. When she heard about my passion for chicken, Dustman easily matched it. She encouraged me to document this endeavor for the Exponent. Thus, I sent Matthew Schneider and Andrea Fuerst to six different drive-throughs across Platteville. They soon returned to their dorm room with a huge bag full of chicken.

Fuerst offered her methods for collecting this data. “I checked the menu of each fast-food restaurant for a crispy chicken sandwich. If they had multiple, I chose their newest version. I ordered each of the sandwiches without any alterations to the condiments.”

Fuerst cut up the sandwiches into fourths and had everyone try one piece. I had them rate specific parts of each sandwich on a scale of one to five, one being bad and five being good except for in the case of messiness, in which one was least messy and 5 was most messy. The categories included: Mouth-Feel, Ingredient Ratio, Chicken Quality and Messiness.

When they had finished rating the sandwiches, I calculated each sandwich’s average in each category. Then, I added the categories together and subtracted Messiness. I would like to note that Samantha Edwards was unable to complete the trials because of her aversion to pickles.

The worst sandwich on my list belonged to Dairy Queen. Its biggest problem was how messy the sandwich was. When cutting the sandwich, Fuerst reported that the condiments oozed out of the sides. The mouth-feel of the sandwich was rated as average. The ingredient ratio and the quality of chicken were subpar. Dairy Queen’s Crispy Chicken Sandwich was deemed “disappointing.”

A step above Dairy Queen was McDonald’s. This sandwich had poor mouth-feel. A sandwich needs a variety of textures, but this sandwich lacked the needed variety. The quality of chicken was quite low, but not the worst. The ingredient ratio and the messiness were improved in comparison to Dairy Queen’s sandwich. The McDonald’s Deluxe Crispy Chicken Sandwich was a step in the right direction for these fast food sandwiches.

In Fourth place, we have A&W’s 2 Chicken Sliders. This one is a little different as it isn’t a chicken patty on the bun, but chicken tenders on a slider bun. Because of this fact, the quality of chicken was bad. This sandwich had the worst quality of chicken. They had average mouth-feel and ingredient ratio. This sandwich was the least messy of our array of sandwiches. I would also like to note that A&W had the nicest workers out of all the fast food restaurants.

Burger King is our next contender. They only really struggled in their ingredient ratio. But we felt that their quality of chicken was best of the options. Burger King’s Ch’King was average in the other categories.

The top two are KFC and Culver’s.  KFC had the best mouth-feel of all the sandwiches and Culver’s had the best ingredient ratio. KFC was just slightly behind Culver’s in every other category. I personally disagree with this decision. And since I am the one writing this article, I can make the final decision. The top crispy chicken sandwich belongs to KFC.