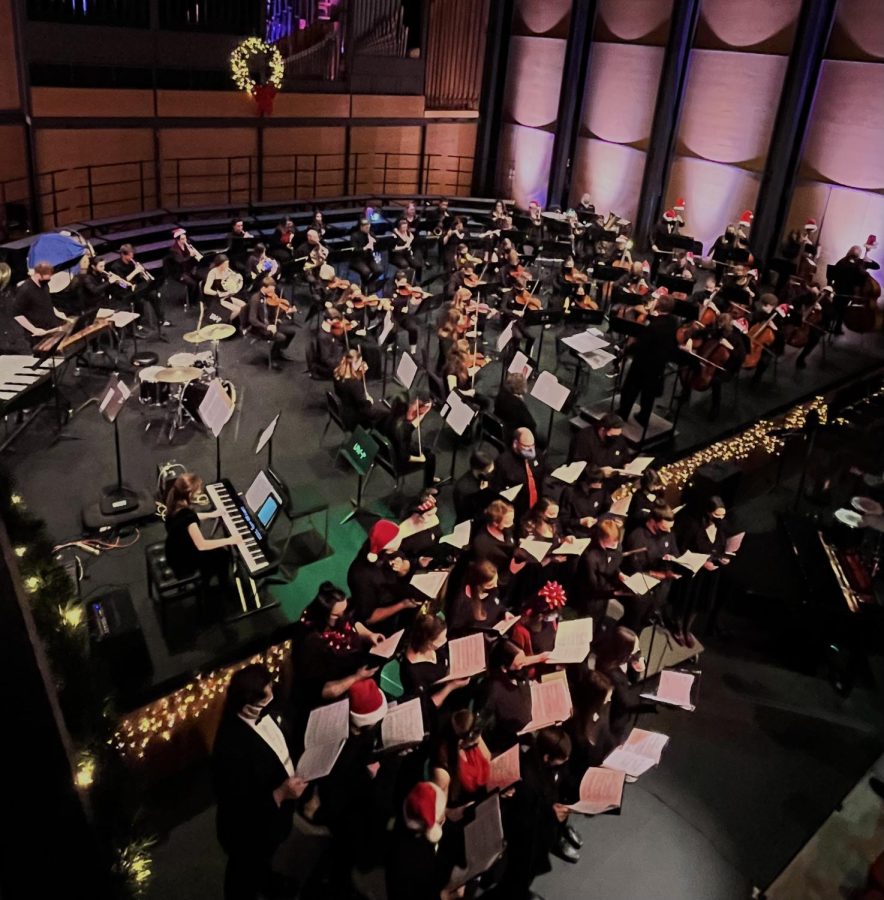 The orchestra prepares for their performances. Anthony Malo photo

On Dec. 3 and 4, the UW-Platteville Symphony Orchestra, Jazz Band, Choirs, Chamber Ensembles and the Platteville Chorale all joined together to perform a collection of holiday music, showing that the best way to spread holiday cheer is singing and playing loud for all to hear. The Center for the Arts and the Brodbeck Concert Hall looked amazing, with garland, trees, wreaths and lights everywhere.

The gala was kicked off by the Symphony Orchestra, conducted by Craig Mason. After a quiet introduction, the stage exploded into an aggressive flurry of speeding bows and crashing cymbals, proving that “Christmas Eve/Sarajevo 12/24” by the Trans-Siberian Orchestra is, indeed, one of the absolute best holiday songs of all time. Lights flashed along with the beat, which instantly drew the audience in. Following this amazing performance, Mason asked for audience participation in singing while the Symphony Orchestra performed Deck the Halls. He encouraged all to stand and sing, to which most of the audience complied.

Following these, two performances were given by the Platteville Chorale, conducted by Gregory Dennis, with “Mister Snow’s Shoes” being the highlight of the two. After the Platteville Chorale, the Concert Choir and the University Singers sang “Go Where I Send Thee,” conducted by Stephanie Klockow. The lyrics bounced back and forth between each side of the risers, creating an entertaining experience for the audience. After this was “Wonderful Christmastime” and “Up on the Housetop,” both performed by the Pioneer Saxophone Ensemble, with the first piece guest conducted by Andrew Reeve and the second piece conducted by Allen Cordingley.

The Symphony Orchestra’s next piece was easily the most enjoyable of the night. “A Mad Russian’s Christmas,” once again by the Trans-Siberian Orchestra, rocked the house with the prominent electric guitar cutting through the wind and string instruments. Lights flashed again and the stage presence the orchestra had was breathtaking. The next highlight was “All I Want For Christmas Is You” with Sydney Byas as the lead vocals. She was accompanied by Jazz 1, which was conducted by Cordingley, who looked to be having the best time in the world, bopping his head and smiling the whole time. Byas’ vocals were definitely center stage as her performance was incredibly impressive, hitting the highest notes and absolutely owning the song. This was most certainly one of the best performances of the night.

After performances by Jazz 1, the Low Brass Ensemble and the Chamber Choir and Craig Mason once again asked the audience to stand up and sing along with the combined choirs as the Symphony Orchestra played “Joy to the World.”

To keep audience involvement going for the last piece in the program, Mason asked the audience to clap on the beat, whilst paying careful attention to dynamic levels, to “Radetzky March,” a song traditionally played on New Year’s Eve in Vienna, Austria. Mason then surprised everyone by saying that the Symphony Orchestra had one more song up their collective sleeve. The lights turned a deep blue and a warm cream-colored light was laid over the stage.

A cellist began playing the first minute or so of “Silent Night” while a pianist played alongside him. Slowly, all members of the Symphony Orchestra faded in to join this amazing and moving piece. Stars were projected onto the back wall of the stage and the quiet nature of the song was the perfect antithesis to the loud and thrilling beginning of the night. Just as quietly as it began, the music, as well as the lights, faded into darkness with the soft warmth of the music just performed still hanging in the air. This song brought tears to the eyes of many audience members, myself included.

The gala was a huge success, with all proceeds being donated to the Music Scholarship Fund from all ticket sales. After the gala, I had the opportunity to ask viola player Sarah Haskell a few questions about her experience with the gala. She explained to me that “The concerts went great. It was exhilarating playing again with all the lights and the electric instruments. The Holiday Gala always excites the orchestra. We get to play pieces we know and love and have a little more fun.” We then talked about the fact that this was Sarah’s last Holiday Gala, and that for her, “It’s bittersweet. I’m going to miss orchestra so much when I graduate. I’m glad Maestro Craig Mason chooses such amazing pieces. He’s challenged us in so many different ways and I’m definitely a better performer because of it.” Sarah told me that there were only four rehearsals before the gala, making the orchestra’s performances all the more remarkable and impressive.

The 2021 Holiday Gala was an absolute joy to see, not once, but twice. Seeing the audience sing along in a room full of lights and garland was great, and every single person involved with this gala, performer or not, should be proud of themselves. This gala was entertaining throughout and I am already looking forward to next year’s! Upcoming events for the Fall 2021 semester include a piano studio recital on Dec. 9 and a saxophone studio recital on Dec. 10.