UW-Platteville is “going green” by using renewable forms of energy 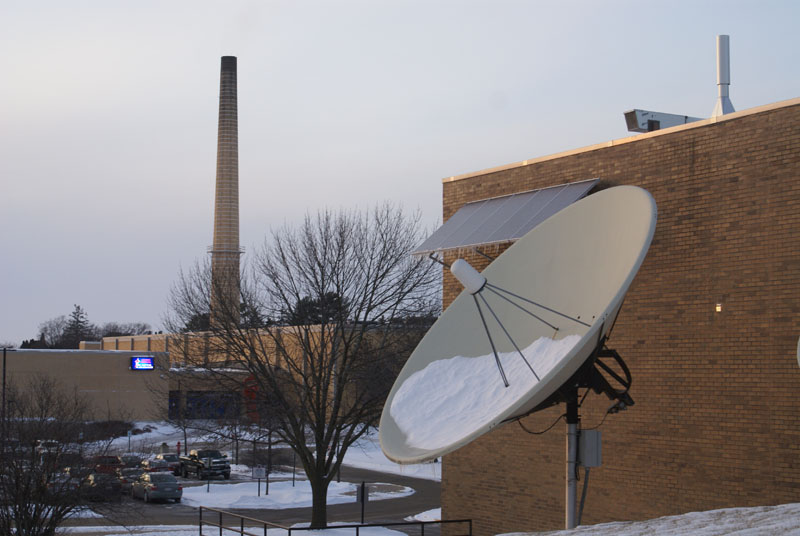 This photo demonstrates how our campus uses both solar power and coal power to heat our air and water. Platteville has four boilers that they use; two are used for the coal and the other two are used for natural gases. The campus is home to renewable forms of energy, such as solar panels and windmills, which aid in electricity costs.

From carrying canvas grocery bags, to receiving e-bills instead of paper statements and drinking from reusable water bottles, “going green” has been a recent trend.

The University of Wisconsin-Platteville is home to renewable forms of energy, including solar panels and windmills, which aid in electricity consumption costs. Still, it is clear on many of these cold winter days that the black smoke coming from the smokestack is a result from coal being burned in the boilers below.

“On campus we have four boilers, two are coal/natural gas and two are only natural gas. The boilers that run only on natural gas are really efficient; they are newer. We typically only use one coal boiler at a time and have the other as backup,” UW-Platteville sustainability coordinator Amy Seeboth said.

Most of the coal that the university purchases is through state contracts, offering a better price because of quantity.

“Natural gas is cheaper and burns cleaner as well,” Platteville resident and retired UW-Platteville professor of industrial studies Charles Knox said. “But if the temperature goes too low, we switch to coal.”

“We use more natural gas on campus right now than coal, together they heat both our air and our water. We are a central heating plant, which is really an efficient system,” Seeboth said.

Knox has seen the price of electricity go up 76 percent and the cost of natural gas has risen 37.5 percent since early 2000.

Knox aided in the installation of five solar panels in 2010 as part of his work with the Renewable Energy Council. “Those five panels were the first visible evidence of our commitment to renewable energy,” Knox said.

Since the system was built, the cost per panel has gone down 57 percent and efficiency has increased, with more than 10 percent more power, according to Knox.

“There are incentives offered from the federal and state governments for having renewable energy,” Knox said.

The UW-Platteville sustainability plan states that less than 1 percent of campus energy is being created by the wind-tower (behind Southwest), solar panels (Russell Hall and Engineering Hall) and passive solar (Ottensman Hall) combined.

Our system could be improved and there are hopes for a more sustainable approach to energy use on campus.

“Renewables are going to be really expensive up front but we need to do this because it’s a cultural and political vision,” Seeboth said.

Once the equipment necessary to harness sustainable electricity sources is purchased and paid back, electricity is free from then on, Knox pointed out.

I would love to see us being in a closed loop, where our waste and the things we no longer need become our energy,” Seeboth said.

More information on energy use can be found in the University of Wisconsin-Platteville sustainability plan.