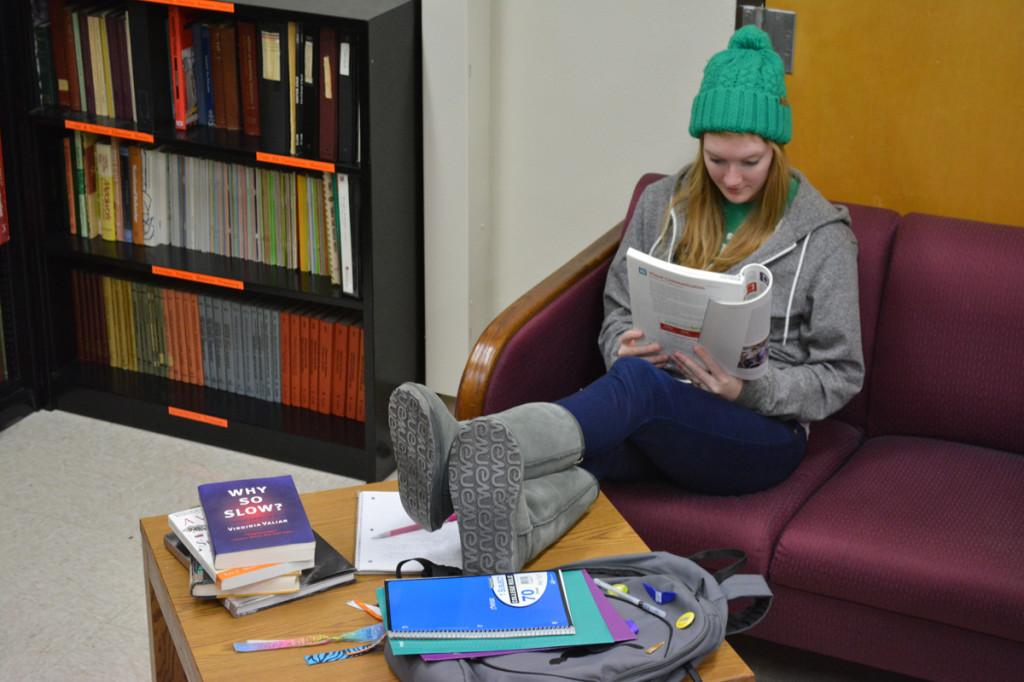 Sophomore media studies major Anna Strand studies homework in the Women’s Advancement Center at 100 Russell Hall, a lounge that was opened to the student body this semester.

The Women’s Advancement Center in Russell Hall at the University of Wisconsin-Platteville was part of a movement to get more women into the agriculture and engineering fields. This movement included opening a lounge to support women’s studies.

Over time, various changes have occurred to the organization Women in Industrial Technology.

“The person running Women in Industrial Technology got moved somewhere else and it just kind of fizzled out,” animal science major Kortney Koch said.

Koch explained that the movement is continuing to work as their genetics and animal science classes consist of a majority of women.

“Men don’t want to listen to you,” animal science major Leanne Hampton said. “It’s harder for women to get jobs, but they are working on getting more women into STEM (Science, Technology, Engineering and Mathematics).”

Up until this semester, the small lounge area by the main entrance of Russell Hall closed its door to the public.

However, the Dean’s Assistant of the College of BILSA Jodie McDermott explained that the lounge was never officially closed; students just needed a key to unlock it.

“I was inspired by Centerpoint over in Ottensmen Hall,” McDermott said. “I looked at it and I thought to myself, ‘We have that. Let’s make it open.’”

Since information is now open to the public, McDermott hopes that students will actually begin to take advantage of the lounge, and she encourages students to use it for simple activities, such as studying or holding meetings.

Although the lounge is now a general study area, the history behind it is still apparent within, as there is a giant flag with Rosie the Riveter hanging in the back of the room.

Another beneficial use of this lounge for female students who are new mothers is that they are able to hang up a sign on the door and breastfeed their child in a quiet, private environment.

The lounge has been reassigned from just industrial studies students to BILSA students, as well, and all are encouraged to use it.

There is no news on whether or not more lounges will be opening up on campus.