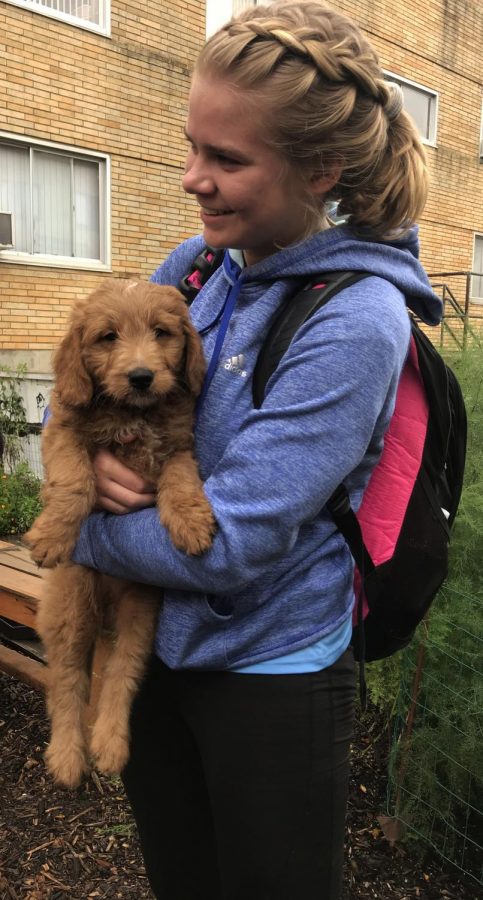 The Green Campus Project at the University of Wisconsin-Platteville held “Puppies in the Garden” at the edible garden. Six miniature golden doodles graced the campus with their spunky presence for the event.  From noon to 3 p.m., a crowd of college kids, all eager for a chance to hold one of the fluffy pups, made their way into the garden.

UW-Platteville’s edible campus garden contains a mix of organically grown vegetables, fruits and flowers and is located between McGregor and Royce Hall. It is led by the Green Campus Project, a student-based organization that believes human activities are linked to environmental impact.

“This was the first ‘Puppies in the Garden’ event.  We thought it would be really fun to do this.  Who doesn’t love puppies? And people like gardens too, so we figured the two together would be fun. The puppies are a little bit more popular than the gardens, so we thought a number of people would come out for the event,” Green Campus Project advisor Amy Seeboth-Wilson said.

The puppies were having the time of their lives, running around the fenced-in garden and cuddling up to whoever was lucky enough to hold them.  They got a little bit muddy tramping around the garden, but that did not stop the crowd from showering them with lots of love and attention.

“I’ve been doing this for years.  It started out with my tractor mechanic, who is also a dog breeder.  I went out to his place, and he said, ‘Well, I don’t know what I am going to do with all of them.’ I asked him what he meant, and he told me he had golden retriever puppies. They were purebred goldens, and I’m a golden guy, so I said, ‘let me borrow one.’  Well, that puppy never went back to the farm; a friend of mine bought it.  I’ve been helping him sell his puppies for at least ten or twelve years now,” puppy caretaker Mark Sethne said.

The lively golden doodles had just turned eight weeks old. That also meant that they were old enough to sell.  With the price set at 750 dollars per puppy, it was a very tempting offer.

“The mother is a petite golden retriever, and she’s just a sweetheart.  I’ve never seen the dad, but he’s a miniature red poodle,” Sethne said.

The puppies had fun running around the garden and showing lots of love to the crowd.  The crowd was all smiles as the puppies put on a show, rolling around and giving lots of puppy-kisses.

“This event was hilarious. I didn’t know what to expect, but this is better than I ever could have imagined,” Seeboth-Wilson said.

It’s safe to say that the campus should be excited and prepared for another ‘Puppies in the Park’ event next year!