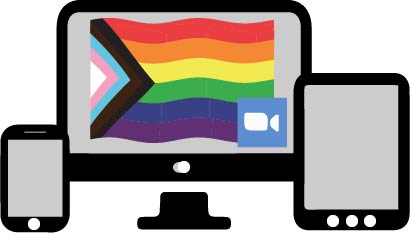 On Nov. 21, the University of Wisconsin-Platteville Alliance kicked off the 2020 Rainbow Rave Conference: Love From A Distance over Zoom.

From 9 to 10 a.m., Skyler Eisert, last year’s president of UW-Platteville’s The Alliance, a campus LGBTQ+ Organization, and the current vice president of the Alliance, Riley Sasse, gave their collaborative presentation, “STEMing From Transphobia: Creating Equity in the Sciences.” They began by asking the listeners a simple question: what does a scientist look like? Then, Eisert and Sasse defined a few key terms to set up conversation including cisgender, when one identifies with their gender assigned at birth; transgender, identifying with a different gender than assigned at birth; and nonbinary, identifying with neither the female nor male gender.

This first segment of the conference was largely a workshop featuring four case studies of transgender scientists. Eisert and Sasse broke the audience members into small groups and assigned each group a biography of one impactful transgender scientist to read over and discuss. When they called the groups back together, they asked everyone to provide both obstacles and advantages that each case study’s life contained. Their objectives in the discussion were to educate participants about the issues that people who transition in a STEM field face and what can be done to break down the barriers for both individuals and society as a whole.

Next, from 10 to 11 a.m., Brandon Ishikata and Joshua Shannon, M.Ed., presented “Breaking the Barrier: Non-Traditional Journeys Toward Finding Our Inner Rainbows.” This was a conversation-style session. They began by making a call for intersectionality and social change.

Shannon began by telling their story. They explained that they grew up in a conservative Catholic home and how they internalized a lot of harmful ideals as a young person. They began to put space between their present self and their past, realizing that they were afraid of losing their faith and family. Eventually, while living in Costa Rica, they came to the conclusion that they didn’t know how to be both gay and Christian, but they had to try. They cite this discovery as the moment they stopped following the expected path and chose a new one.

Shannon explained that they have worked at many different establishments that put money into queer groups and inclusive spaces. However, they stressed that even these establishments need to be better at inclusion. They shared how their current job won’t allow them to display pronouns on nametags or emails.

“Just because a company has a diversity statement, that doesn’t make it a queer-inclusive space,” Shannon said.

Ishikata shared his experiences working at May I Have This Dance, a Latin swing ballroom. He cited one particular moment in which he asked a straight, older man to dance “the dance of love” with him on his birthday. The man accepted, and it felt to Ishikata like breaking a barrier, even though their dance was completely platonic.

Ishikata finds a lot of joy in queering up traditionally heteronormative spaces and providing queer representation to those who may not see the LGBTQ+ community openly in their lives. He uses the analogy of queerness in dance, providing his students with a break from the heteronormative idea of the leader being the man and the follower being the woman, to break boundaries and open up traditional spaces.

“Dance with who you want to dance with,” Ishikata said.

Ishikata explained that the most important way to maintain friendships and relationships alike is just to say, “I love you.” By celebrating authentic identities and showing authentic love for friends, the crushing loneliness and ostracization of the age of technology and COVID-19 can be combated.

From 11 to 12 p.m., three members of the UW-Platteville Alliance spoke on how identifying as LGBTQ+ has impacted their experiences throughout their education and lives. They shared how college has provided more representation for them than their high schools did, and how they have had more opportunities to learn queer history. They testified that it is easier to be out in college as there are more queer people and friends to be found. They spoke about labels as more of a tool to help others understand you than a way to define yourself.

Another panel member echoed this sentiment, saying “I hate labels. I do, say, wear and love, what I like.”

The panel explained that many college students, specifically queer college students, come from hard places. Because of this, it is important to communicate and help each other as much as possible. The members shared their coming-out experiences and stressed the importance of reaching out as, often, “you are not the first person to experience these hardships.”

After a short lunch break, Dr. Pip Gordon, an associate professor and gay studies coordinator at UW-Platteville, presented “A Queer Response to Pandemic.” In this talk, Gordon framed the current COVID-19 crisis against its parallels to the AIDS crisis of the 1980s and 1990s. Gordon explained how the United States has historically made a habit of focusing on Wall Street issues rather than the crises its people face. He provided examples of how the LGBTQ+ community used art to find a way forward during the dark days of the AIDS crisis, reading for the audience poems such as “I Want a President” by Zoe Leonards and “The Impact of AIDS on the Artistic Community” by Fran Liebowitz.

Gordon discussed how the enormous upheaval of modern daily lives in response to the coronavirus pandemic, along with the high number of deaths, have been compared to previous pandemics such as the 1918 influenza. Gordon’s presentation centered around demonstrations of how the LGBTQ+ community used its voice and the power of empathy to humanize the losses faced during the AIDS epidemic, and how, in lieu of a cure to disease, art continues to provide an antidote to despair and offers lessons on how to face the current moment. He ended by reading “How to Watch Your Brother Die,” a poem by Michael Lassell. Through the message of the poem, Gordon encouraged empathy and a broader understanding of the effects of this pandemic.

After a short social and networking break, two presenters from UW-Platteville’s Office of Multicultural Student Affairs, Sam Lopez and Corey Young, presented “All of Me: When Sexuality and Race Meet.” Lopez and Young’s presentation focused on understandings of intersectionality, defined as “an understanding of how aspects of a person’s social identity/ies such as race, class and gender combine and overlap to create different modes of discrimination and privilege.”

They explained that the Feminist, Anti-Racist and LGBTQ+ Movements have largely failed to be intersectional. Intersectional individuals face barriers such as economic insecurities, as LGBTQ+ African Americans and Latinx communities continue to be economically disadvantaged by persistent discrimination, housing insecurity, a lack of quality, affordable healthcare and fewer educational opportunities. Lopez and Young shared that 30% of queer Black people live in poverty compared to 25% of Black people outside of the queer community. Additionally, 48% of Hispanic transgender people live in poverty compared to 32% of Hispanic cisgender straight men living in poverty. Similarly, only 7% of white cisgender straight men are poor, compared to 22% of Black and 32% of Hispanic cisgender straight men.

Lopez and Young also explained that intersectional individuals also face higher levels of violence. From 2017 to 2020, the number of transgender people murdered every year has increased from 29 in 2017 to 37 currently in 2020. They also pointed out how the current pandemic has highlighted the health disparities faced by intersectional individuals.

After the conference, the audience was invited to tune in to a Facebook live stream of the annual drag show.