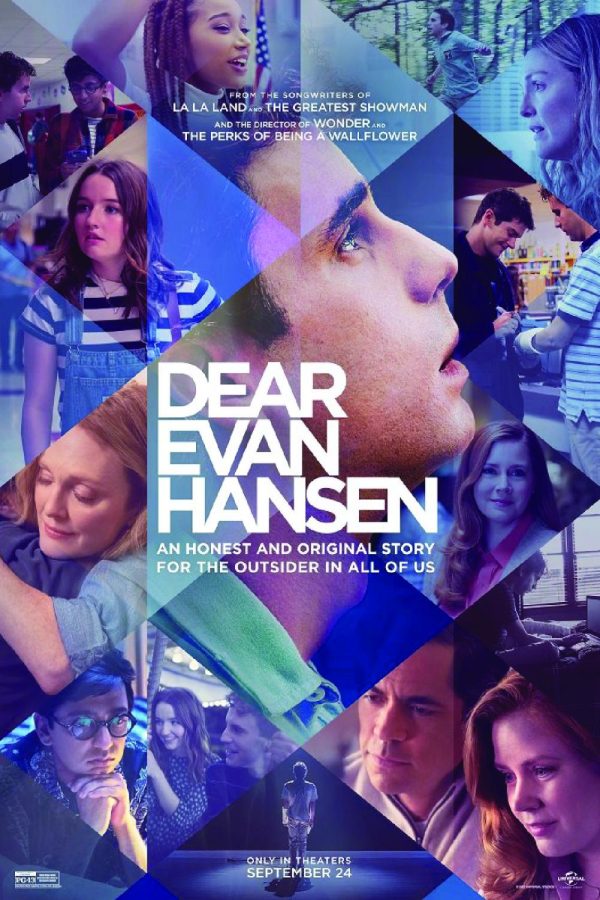 This past Saturday, my two roommates and I settled into our theater seats, bouncing with anticipation. We couldn’t wait to see our favorite musical come to life on the big screen. We had all seen the initial reviews, most of them not overly positive, but we held out hope.

The first problem of the film was Evan himself. Now, I love Ben Platt and think he was an amazing Evan Hansen in the stage production. However, when you’re filming a movie, having actors who look their age is much more important. The distance of the audience and the stage disappears on film, and suddenly you can see every pore and eyelash on an actor’s face. The solution to this was to cake Ben Platt’s face in so much makeup that he looks sick throughout the entirety of the movie. It may have made him look a bit younger, but it was difficult to look at during multiple parts of the movie. The lack of contouring and overall depth on Platt’s face makes it feel more like a vampire movie than a teen drama film.

One argument I’ve seen for keeping Ben Platt on the cast for the film was that he is the most well-known Evan Hansen. And while I do agree with this sentiment, as a fan, I would have enjoyed this movie much more had it been an actor who looks closer to Evan’s age, 17. It would also have given me another soundtrack to fall in love with, as much as I loved the original Broadway cast recording.

Speaking of the soundtrack, the film cuts out a few songs that are pretty important to understanding the plot of the story. The removal of these songs forces the audience to infer a lot more about the family dynamics of the characters than the musical does. In my opinion, it was a mistake to remove the songs.

Another major qualm I had with the movie adaptation was the random plot points that go nowhere. After watching the movie, one of my roommates and I had a very long conversation about how disappointed we were with the film, and one thing she brought up was the idea of Chekhov’s gun. This is the idea that all of the details of the work should play a part in the overall narrative.

Small spoiler here: one of the most infuriating scenes for me was watching Zoe Murphy play guitar for a solid 15 seconds in one scene, and then not use it during the following music scene, where it would have worked perfectly. It doesn’t help that the entire scene of her playing felt like it was only there for product placement, as the character boasted a pair of Beats headphones with the logo clearly presented at the center of the screen.

The final complaint I’ll talk about here, though I have many more, is the lack of connection we feel to one of the main characters, Connor Murphy. Though we do get one new song that gives us a small look into Connor’s character, we miss out on a lot of other scenes that help us to know who he is and why he is a main character. Someone who knows nothing, or very little, about the plot would think that Connor is a minor character, when in reality he is supposed to be seen as part of the main cast. It was really disappointing and is a major part of my dislike for this adaptation.

At this point, you may be thinking that I wouldn’t recommend this movie or that I hate it, but that isn’t true. There were a few things about the movie that I really liked, including the casting of characters other than Evan Hansen, the new song I mentioned earlier and the scene for the song “Sincerely, Me.” There was a lot that the film did right for someone who doesn’t know the musical as well as I, and other fans, do. For this reason, I would likely recommend the movie to a casual viewer if they asked if they should watch it.

Though there are lots of good things about the movie adaptation, there are a few too many flaws and cringe-worthy shots to ignore. Because of the overwhelming number of flaws, I give this movie a solid 2.5/5 stars.