Friday Night Club brings back a delicious favorite event that allowed students to decorate cupcakes and be judged in competitions. The event was brought back after two years due to its popularity among students. 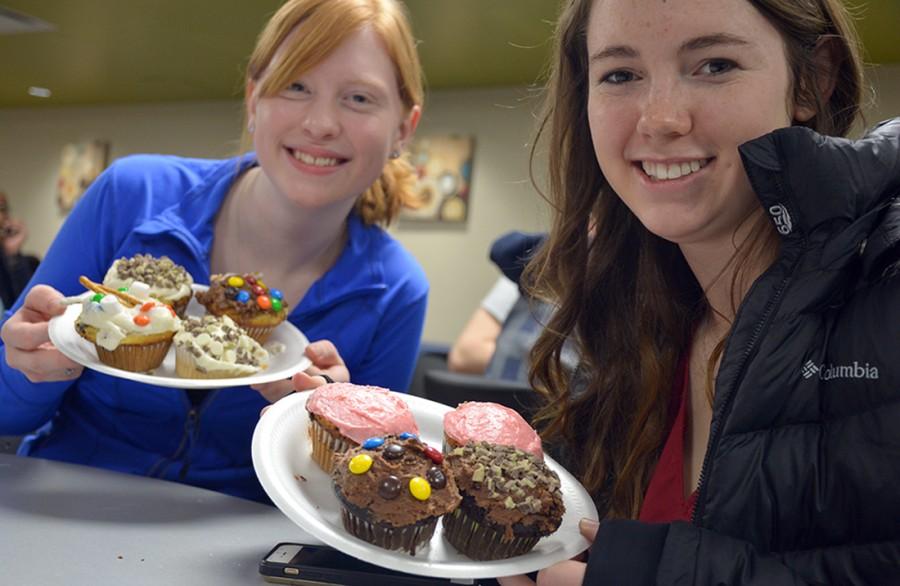 Students used frosting as their ammo inside Dobson Hall when they competed against each other for Cupcake Wars hosted by Friday Night Club.

“This is the first time they [FNC] have done this event in 2 years,” senior mathematics major, and Dobson Hall Resident Assistant Cassie Roach said.

“We decided that it would be a cool event to run again. People really enjoy it and get free food,” Ferree said.

Cupcake Wars is similar to the hit television show on Food Network Channel called Cupcake Wars. In the show, there are four teams of professional bakers that compete in three different themed rounds. In each round they present their cupcakes to judges, who then decide the winner. The FNC version was run in a similar fashion because of the large turnout the event had the last time it was put on.

Everyone on the University of Wisconsin-Platteville campus was welcome to come to the event. Once you arrived, you were given the option to sign up, with a team of three, for any of the six, ten-minute rounds that were offered. There were three themed rounds where contestants had to design their cupcake in a certain way. There was a superhero, animal and ugliest cupcake round. In addition, there were three challenge rounds that made contestants do things such as decorate the cupcakes while one person was blind folded or only being able to decorate a cupcake with your non-dominate hand.

Each round was judged based on creativity and teamwork. The judges consisted of a variety of people from the Residence Hall Department, including the director of Residence Life Linda Mulroy-Bowden. However, if you wanted to come and enjoy one of the over 600 cupcakes, five gallons of homemade frosting and the large array of toppings and design a cupcake to eat, you were more than welcome to.

“My favorite part of the event was the free cupcakes and spending time with friends,” freshman, electrical engineer Matthew Wendling said.

In order for this event to run smoothly, there was a lot of planning and organizing involved.

With this being an event that involved food, Ferree and Lehrer had to make sure there were no nuts in any of the products, due to the large amount of people that suffer from that allergy. If people had questions regarding their allergies, those working the event were standing by the tables that had food, so they could ask questions, Lehrer said.

Both Dobson and Wilgus considered cupcake wars a success as the whole event was filled with laughter and cheers.