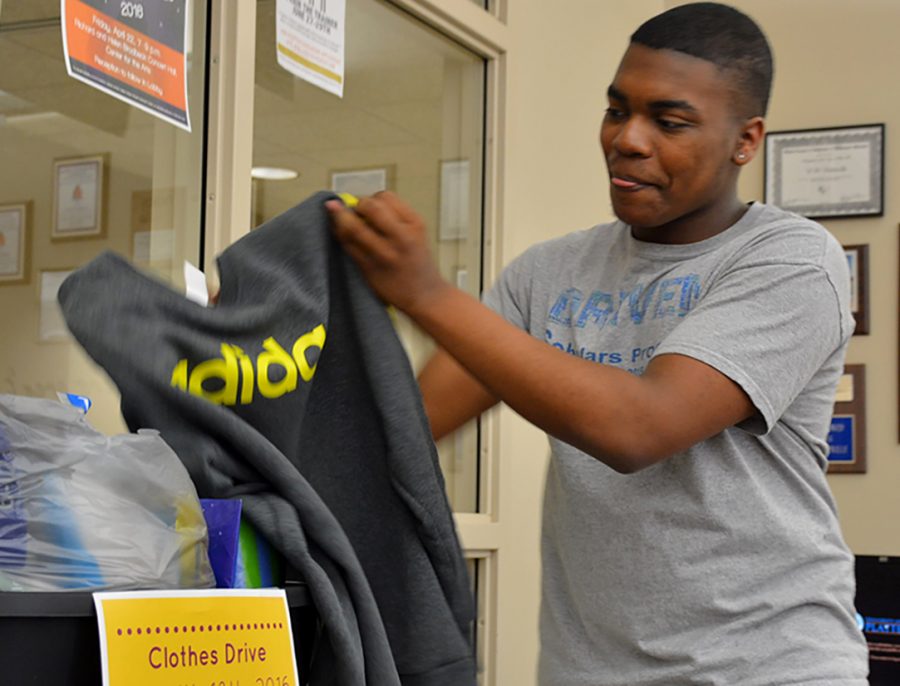 Justin Toney, junior media studies major donates clothes to Black Student Union’s clothig drive. The drive is going on until April 18, when the clothes will be donated to Orion Family Services.

Do you have clothes that you no longer like? Coats that no longer fit? Instead of letting them take up closet space, you might consider donating them during the University of Wisconsin-Platteville Black Student Union’s  (BSU) clothes drive.

The clothes drive will be held from April 4 to April 18, with a collection box in the Pioneer Involvement Center in Markee Pioneer Student Center. All donated clothes will go to Orion Family Services, a Wisconsin-based group which runs group homes for adolescents and offers family counseling.

Black Student Union Public Relations Representative and junior biology major Ashley Owens said that she first saw a need for the clothes drive when she saw some of the boys from the group home run by Orion Family Services in Platteville.

“I saw that the Orion group home boys wouldn’t have coats on in winter and it inspired me. I thought that if we did a clothes drive, we could get clothes for the boys and for females too,” Owens said.

Nicole Hamilton, program manager at the Orion Family Services Group Home in Platteville, said that the organization runs two other group homes in Monroe and in Madison. The Platteville group home houses up to eight boys at a time.

“We have quite a few kids that come from the Department of Corrections and when they come to us they might have absolutely nothing but the uniform that they are in while they are in Corrections. So we have to provide shoes for them, pants, T-shirts, pajamas, shirts and coats,” Hamilton said.

Donated clothes that are not needed by current residents are stored away in preparation for future residents of the group home.

Hamilton said that the organization works to give the group home residents structure while introducing them back into the community through activities like volunteer work at local churches and Goodwill and community service for the city of Platteville.

“Our overall mission at Orion is healing the mind and spirit of children and families. Relationship building is a huge part of the healing process whether it’s in our home with our peers, the staff that we have here or out in the community,” Hamilton said.

Senior psychology major and president of BSU Brianna Jones said that this was the first time UW-Platteville’s BSU has done a project like this while she has been a member.

“It’s good to get out and do things in the community, and also is a good transition for new leaders,” Jones said.

Elections for next year’s BSU leaders will be held in the next few weeks.

“It is always good to give back. We’ve been blessed to be in the position that we are in and now we want to bless others,” BSU vice president and junior computer science major Dexter Bland Jr. said.

BSU meets every other Monday at 6:30 p.m. in the Computer Conference Room in the Bear’s Den. Anyone who is interested in participating is welcome to attend the meetings.