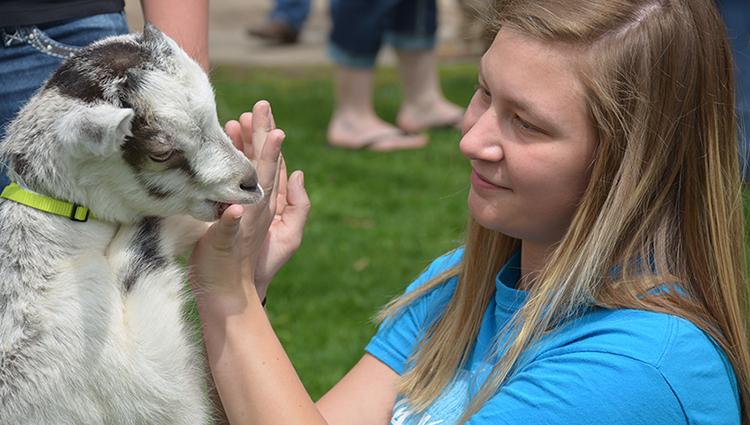 The smell of agriculture was in the air as the annual Ag Day carnival returned to the University of Wisconsin-Platteville.

“The event is geared towards bringing agriculture out of the school of agriculture and to the rest of the community,” sophomore agriculture education major Dayna Anderson said. “It’s a great opportunity to learn more about the facets of agriculture.”

Anderson was this year’s campus chair of Ag Day. She was in charge of fundraising, contacting clubs and organizing the event.

There was something for everyone to enjoy at Ag Day. Sheep, dairy calves and goats appeared on campus for guests to look at and pet as well as a large red tractor.

“All of the animals are so cute,” junior biology major Serena Giorgi said. “I think it’s great that they put something like this together for people who don’t know what the agriculture life is all about.”

Sheep shearing demonstrations was also an activity that was offered this year. One of the members of the Collegiate Farm Bureau’s family shears sheep for a living and was willing to show the UW-Platteville community how it works.

“PETA [People for the Ethical Treatment of Animals] came out with an article saying sheep shearing is harmful to the sheep,” Reynolds said. “In reality it gives them a better cleaner feeling and takes the extra weight off of them.”

To raise money for the UW-Platteville Colligate Farm Bureau members sold walking tacos and Ag Day T-shirts for anyone to purchase.