Beatboxing comedian shows off his talent at UW-Platteville 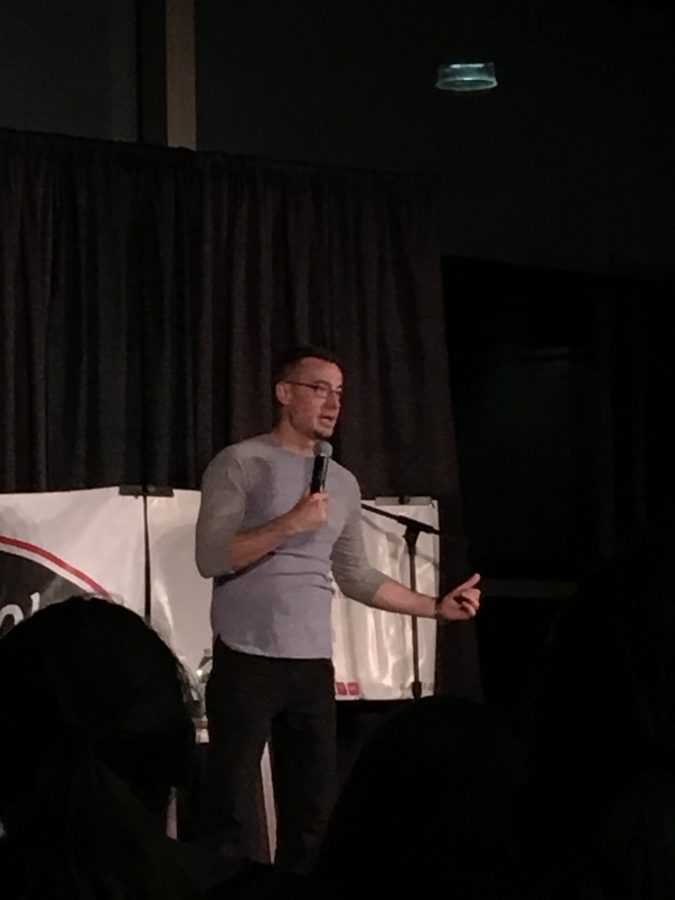 Peanut butter and jelly, and cake and ice cream. These are what people think when asked for perfect combinations. This past weekend, beatboxing and comedy was the combination that took over the University of Wisconsin-Platteville Markee Pioneer Student Center.

On Oct. 1, comedian Tyler Boeh performed his beatboxing and stand-up routine as Campus Programming and Relations presented their second Stand-Up Saturday act of the school year. However, Boeh had a little different background than most stand-up comedians. He started performing in multiple different capacities before he decided stand-up was what he wanted to do for a living.

“I started doing theater probably in third or fourth grade, but I always did the school plays, and then I started doing improv. I just really enjoyed that, and when I got to college I got involved in improv as well. I was in a group that had a regular performance; we performed on campus, but we also did shows at local bars and then I got into an acapella group as well. So, I was singing and beatboxing in an acapella group for four years and then after. I didn’t start stand-up until after college,” Boeh said. “I didn’t grow up listening to a lot of stand-up. I was more into Saturday Night Live, so I kind of thought that was what I wanted to do, but after college I ended up going to this one open mic and after I did my first open mic, I was just hooked.”

Boeh started his act by explaining how he drinks large amounts of caffeine before he performs, but that is not the only way he prepares for his shows.

“I like to listen to music before shows, kinda [like] pump up music. I also like to look at the college [itself],” Boeh said. Before coming to perform at UW-Platteville he said he researched the school and its history because he likes to make the show relatable so he can make a connection with the crowd.

There were a variety of topics Boeh used as material for his routine in addition to joking about UW-Platteville’s history. Gags about the Olympics and state mottos generated an array of laughter from the audience. With that, jokes that integrated his beatboxing skills seemed to get the biggest positive reaction. He first started to learn how to beatbox when he was in middle school and continued to grow his talent from then on. It was after he left his acapella group that he felt the need to incorporate this particular skill into his comedy routine. To some, this has made him stand out.

As the show progressed, laughter continued to fill the air. Material about how the English language is changing back to hieroglyphics due to emojis and how extremely long church services drag out the amen at the end of a song got quite a bit of attention. The hit of the night seemed to be when Boeh incorporated his beatboxing in with jokes about having sexual relations.

“My favorite part of the show was the beatboxing sex scene,” sophomore environmental engineering major Will Henning said.

It is no surprise that with his success in acapella Boeh would add beatboxing into his stand-up routine, especially since the beatboxing aspects got the most reaction from the audience. He has no preference on where he performs his comedy, as long as people are able to leave his show laughing.

“Sometimes I’ll do a show and people will come up to me and be like, ‘I had just a rough week and I just needed to come out and laugh and you just made my day.’ That makes my day when people say things like that.”

Even though the goal of comedy is making people laugh, for Boeh, connecting with the crowd is his favorite part of performing.

“My favorite part of any show is connecting with people. I think a lot of people think that stand-up, or performers in general, enjoy having the spotlight on them. I don’t even think necessarily that’s the case. A lot of stand-ups are very shy people. I am not– I am outgoing, but what I like about it isn’t being the center of attention, it is being able to get in front of 2-300 people, or even 50 people or whatever, and then getting everybody to connect together. It’s about that connection. Just [the] exchange of energy and just getting everybody together,” Boeh said.