Swapping out turkey for insects 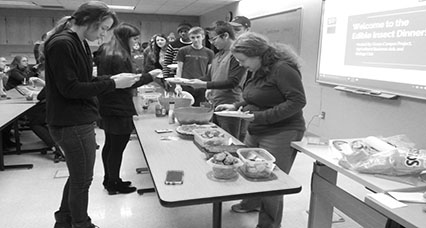 When people think about Thanksgiving they think of the food. The mountains of mashed potatoes, all the turkey and stuffing you can eat. The last thing on someone’s mind is insects. People associate insects with disgusting thoughts, but on Nov. 21 the University of Wisconsin-Platteville Green Campus Project, Biology Club and Agricultural Business Club gave people the chance to change their minds about insects.

The three clubs joined together to host an insect Thanksgiving. There were foods that contained real insects and insect-themed dishes. Before people were able to enjoy their insects, two members of the Agricultural Business Club gave a presentation on why people should eat bugs. The presentation included facts about how to prepare bugs, bug nutrition facts and how eating bugs could save people money.

After the presentation people were able to test their limits with the variety of insect foods.  For those that were feeling less adventurous, there were “ants on a log” and dirt cups with gummy worms. However, for those wanting to test their limits, there were plenty of insects to indulge in.  Those that wanted to get a taste of their adventurous side were able to start small and work their way up if they chose to do so. With that said, there were only two levels of insect consumption. The lowest level included ground-up insects, where it was harder to taste the bugs. This level included a variety of breads that were made with cricket flour.

The top level included eating the insects whole or eating them whole along with a piece a pie. There were whole crickets for those feeling really dangerous, as well as a pie that was garnished with whole crickets.

“The event as a whole was very entertaining because I only seen characters from Lion King eat bugs,” Toney said.

Even though many seemed to be nervous before trying the food, the event seemed to be a hit. The room was filled with students, and all those who attended appeared to enjoy themselves.