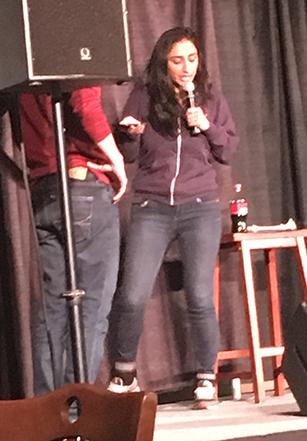 Deol performs as the last stand up comedian of the semester.

Kiran Deol brought her unfiltered humor to the University of Wisconsin-Platteville’s campus as the last comedian of the semester for Campus Programming and Relation’s Stand-up Saturday on Dec. 3.

Deol has worked in the entertainment business for a number of years now. Most notably, Deol has appeared on How to Get Away with Murder, New Girl and The Mindy Project. She has even been nominated for an Emmy award for her work on Woman Rebel.

Before her set, Deol did some research on UW-Platteville and its 3-to-1 male to female ratio. Deol asked the audience who among them were single. She suggested that the available men should sit with the available women among the crowd. Deol even acknowledged the infamous “Platteville rating scale” where women are rated higher in beauty because of the slim female population on campus.

“I think it’s a bit ridiculous. There is nothing different between girls here and anywhere else. [There] should be a rating for how desperate men are instead of bashing the women about their looks,” senior criminal justice major Liz Donovan said.

Melcher Hall was mentioned in Deol’s set by saying that she wouldn’t want to bring a black light into that building.

“[I like how] she made jokes pertaining to the campus,” senior chemistry major Maddie Zilles said. “[it] made [the routine] more personal.”

Deol integrated her childhood into her performance by retelling stories about growing up in Florida with a unibrow and getting bullied for it. Deol joked about her relatives in England where they also make fun of her because of her American accent and her overuse of the word “bitch.”

“[My cousin] asked me if I was trying to re-appropriate the [word “bitch”] for female empowerment. Bitch, less thinking. I live where the sun has fried my brain, that’s why I keep using it,” Deol said.

Deol continued her set by satirizing women’s rights and how women still make less than men in the same job field. She joked by saying that women should get a “coochie coupon.” The “coupon” would take 30 percent off everything they ever purchased in order to even out the inequality.

Deol ended her set by pulling up one of the single men in the audience and asking him to walk across the stage while she catcalled him. She said that she would like to live in a world where women are allowed to catcall men on a regular basis.