Rainbow Rave pulls out all the stops 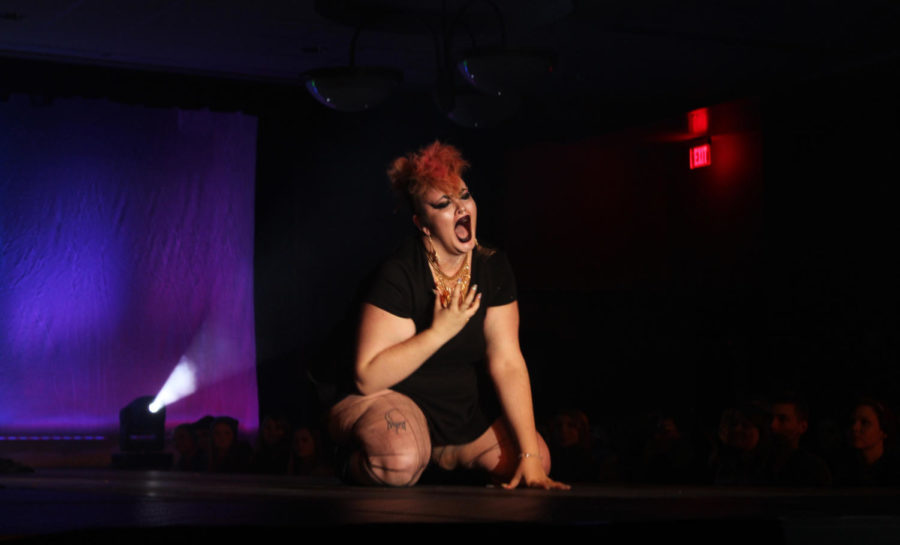 One of the performers falls to her knees as she lip syncs Gabbie Hanna’s “Out Loud” during the Rainbow Rave.

Kings and queens invaded the University of Wisconsin-Platteville this past weekend as the Alliance hosted their annual Rainbow Rave conference and drag show. The conference held several workshops dealing with the topics of gender and sexual identity, sex education, HIV in Wisconsin and a question and answer panel with the Alliance members.  The goal of the conference every year is to educate attendees about the lesbian, gay, bisexual, transgender and plus community.  The Rainbow Rave has been a tradition at UW-Platteville since the early 2000’s.

“Planning Rainbow Rave takes all year. We have to budget and reserve Velzy a year in advance. Next year’s Rainbow Rave will be November 10th and we are already talking about speakers and themes,” junior psychology major and alliance member Alexzander Dietterich said.

The biggest attraction for the Rainbow Rave, though, is the highly anticipated drag show.  Each year the Alliance brings professional drag queens and kings to campus to host and perform in the show.  Songs that the performers lip synced to included Tina Turner’s “Proud Mary” and Logic’s “1-800-273-8255.”  Along with the professionals, members of the Alliance also performed on stage.  Since planning starts a year in advance, the Alliance members start asking people to perform early in advance. They create Facebook groups specifically for the event, encouraging people to participate.

Attendees were encouraged to walk up to the stage and tip the kings and queens while they were performing. Any money that was given to the performers would cause them to kiss the tipper, put the tipper’s face in their crotch or bring the tipper on stage.

“It was pretty interesting [being brought on stage],” senior history major Sean Stewart said. “I liked being in front of the lights.”  Stewart was brought on stage by performers Beyongay and Gay-Z Carter while he was tipping them.

For Stewart, he respects the performers for having the confidence within themselves to perform on stage in front of hundreds of people.  Even though he has dressed up as a princess for classroom related activities, he doesn’t believe that he is confident enough to do drag.

“I really liked the audience participation in it,” Stewart said.  “When it’s funner for them [performers], it’s more fun for you.”

The history of drag queens and kings has been up for debate within the LGBTQ+ community within recent years because it can be seen as being offensive toward the transgender community.

“Drag culture has a history of being transphobic and a lot of drag culture has worked on moving past that. It is also frustrating because people turn out for the show to be entertained, but so few go to the conference to learn about the community,” Dietterich said. “Drag culture overall is highly linked to the community and still plays an important role in its history, so I feel it’s very important to include [in the conference].”

For senior history major and performer Uriah Severinsen, drag can be viewed as “problematic” because of instilled gender norms.  Severinsen believes that as long as society continues to obey these norms, people will find the negativities within drag culture.

“Pushing boundaries, creating conversations and bringing attention to issues is inherently installed in drag culture.  There should not be a question whether or not drag is politicized because the very act of drag is automatically politicized by society.  Whether it’s about some grand movement like feminism and civil rights, or to smaller topics like men wearing make up, drag is naturally used to confront biases and bring these conversations to the forefront of people’s minds,” Severinsen said. “We, as a culture based on democracy, thrive off of progress, and every single instance of growth as a civilization starts with the simple act of conversation.”