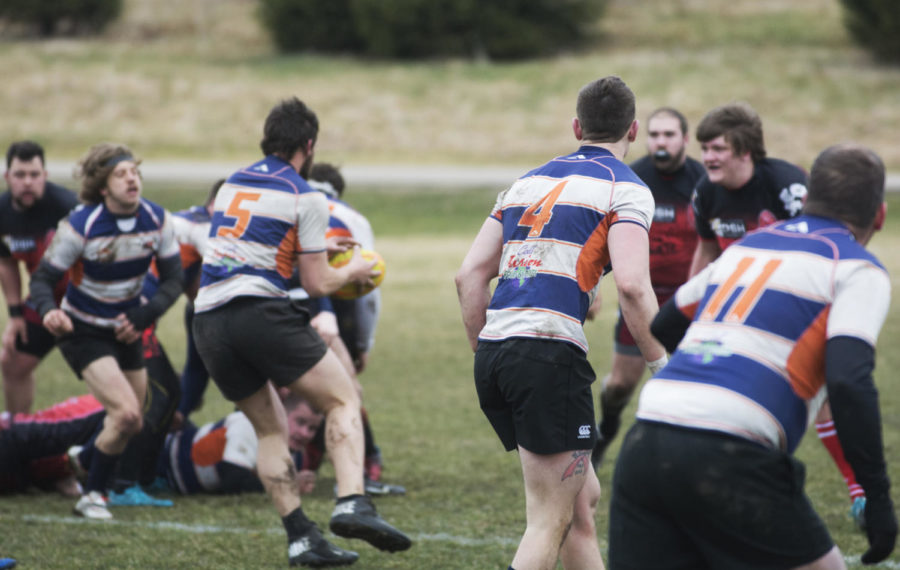 Teams from all over Wisconsin and Iowa came out to compete: Madison, Oshkosh, Fox City, and Fond Du Lac are to name a few. Since the men’s and women’s team both compete during this event, the men held their portion at Memorial Field and the women’s was held at Miners Field. Elliot Gaul, a sophomore accounting major and back captain explained that it became Mudfest because of when it happens. In April, the fields are usually really muddy because Memorial Park is the lowest point on campus, so it is where all the water usually ends up.

In the week leading up to Mudfest, the rugby team had been focusing on the individual needs of the players. After they warmed-up together, they split into groups so they could work on strengthening together. They did this so they could tailor to the needs of any specific player. After this, they came together at the end of practice and worked as a group. Joe Biagi, a junior health and human performance major and forwards captain, talked about what they had done to prepare for the tournament. He said that they worked very hard during practice to make sure they could make the push to playoffs.

The preparation for Mudfest starts early in spring semester. All the planning and preparation is a team effort to make sure everything goes smoothly once the day arrives.

“My job for planning Mudfest is to get all the teams and trainers here. We invite teams that are near us, but it’s a first-come first-serve type of tournament,” sophomore software engineering major and match secretary for the rugby team Richie Bergemann said.

It is expressed that trainers are of just as much importance as the players. Trainers are needed for players who have a past injury that needs to be wrapped up or looked at. They are also there to assist in case of injury during the tournament.

Each team played four games, and the teams who played in the finals were chosen based off their four-game record that day. Fon Du Lac won all four of their games, which placed them in the finals immediately. The next team to go to the final round was Northeastern Iowa who won 3-1. Fon Du Lac ended up winning the tournament, placing Northeastern Iowa in second and the Platteville Men ended in third. The Women’s Rugby team came in first in their tournament.