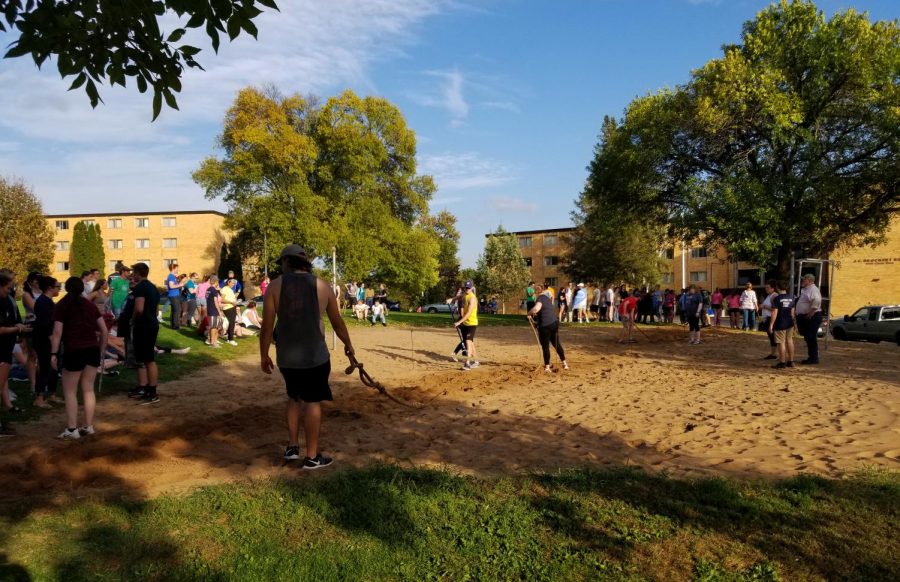 One of Homecoming’s many activities is the annual Tug-of-War. Student Organizations gather in teams of eight to pull opposing teams across a marked line. As teams climb the winner’s bracket they earn points towards their overall Homecoming score.

This year’s tug-of-war took place in The Circle’s volleyball courts instead of the flooded fields of Memorial Park. This decision was made a few days prior, when the recent rainfall flooded Memorial Park leaving the grounds untillable.

“It [the tracker and tiller] was gonna get stuck. We made the call earlier in the week. Not just the tug-area but the whole park was flooded,” director of campus activities David Nevins said.

Despite the change in venue there was still live music provided by the campus radio, WSUP 90.5fm, and a number of organizations came out to compete.

One pair of organizations, Alpha Gamma Rho with Sigma Alpha, came prepared with a strategy.

“If we don’t get a good start then we’ll hold ‘em. It could be promising,” senior mechanical engineering major Casey Clark said.

Another organization with a winning strategy was Rountree Commons, who went 3-2 in the tug-of-war bracket.

“Our strategy is to have fun and pull as hard as we can,” junior forensic investigation major Jordan Groove said.

The crowds cheered on each team that pulled.  Some teams had unique chants and others wore matching colors to further show their team spirit.

“It was interesting to hear all of the chants and see that the spirit level was high,” senior business administration major and event coordinator Tyler Cota said.

“It’s a cool event and it’s a good team building exercise. It was fun to see the team’s strategy,” Nevins said.

This year’s homecoming tug-of-war event was a success.  Spectators and participants even commented on the lack of mud. However, CPR still plans to return the event to Memorial Park next year, so long as weather permits.