Dr. James Pollock reads a series of poems from his recent publications. 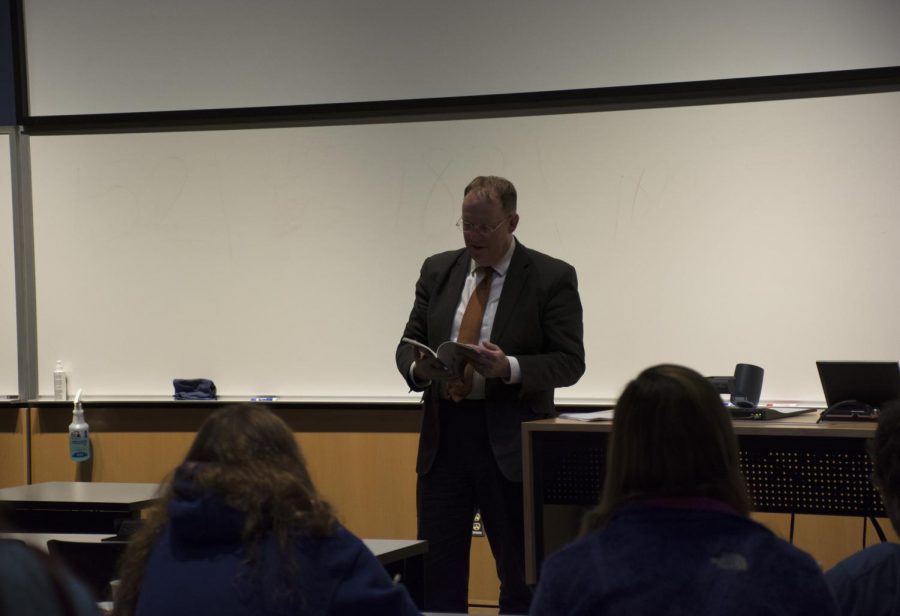 The Department of Humanities hosted poet James Pollock for a private reading of poems from his book Sailing to Babylon. The reading opened with English professor Stormy Stipe introducing the visiting poet. In this introduction, Stipe talked about her admiration for him and how she had the opportunity to see Pollock work on the manuscript he was presenting.

Many students gathered in the Lundeen Lecture Hall to listen. He read a wide array from his poetry book including “The Museum of Death” and “Quarry Park.”

Before he read each poem, Pollock gave a short summary about how he found the inspiration to write it. When it came to “The Museum of Death”, he spoke of a workshop he attended. At this workshop, he and several other poets were given the task to write a poem about this museum. He explained that he took the concept and the name of the museum and wrote his poem.

“James Pollock’s poetry reading was a lot of fun. Listening to Dr. Pollock read his poems was a much different experience than reading his collection silently to myself.  Where I may have continued reading as the enjambment of the lines suggested, Dr. Pollock made a full stop, or vice versa,” Senior professional writing major Zheniya Fager said.

Another poem that he talked about was “Poet at Seven.” He explained that this is a response poem. A ninetieth century poet named Arther Rimbaud wrote the original poem that several poets, including Pollock, have since responded too.

“I think it’s awesome that UWP invites writers to read. As a writer, I really benefited from talking to him after he finished his reading,” Fager said.

Pollock explained that one of the ways he finds the inspiration to write is from YouTube videos. In his poem “Quarry Park,” he wrote about a cardinal. He explained that he listened to hours of cardinals on YouTube so that he could describe it just right.

Pollock explained that when deciding which poems were going in the manuscript, he wanted to make sure each was just as strong as the one before or after. That way all the poems were equally great.