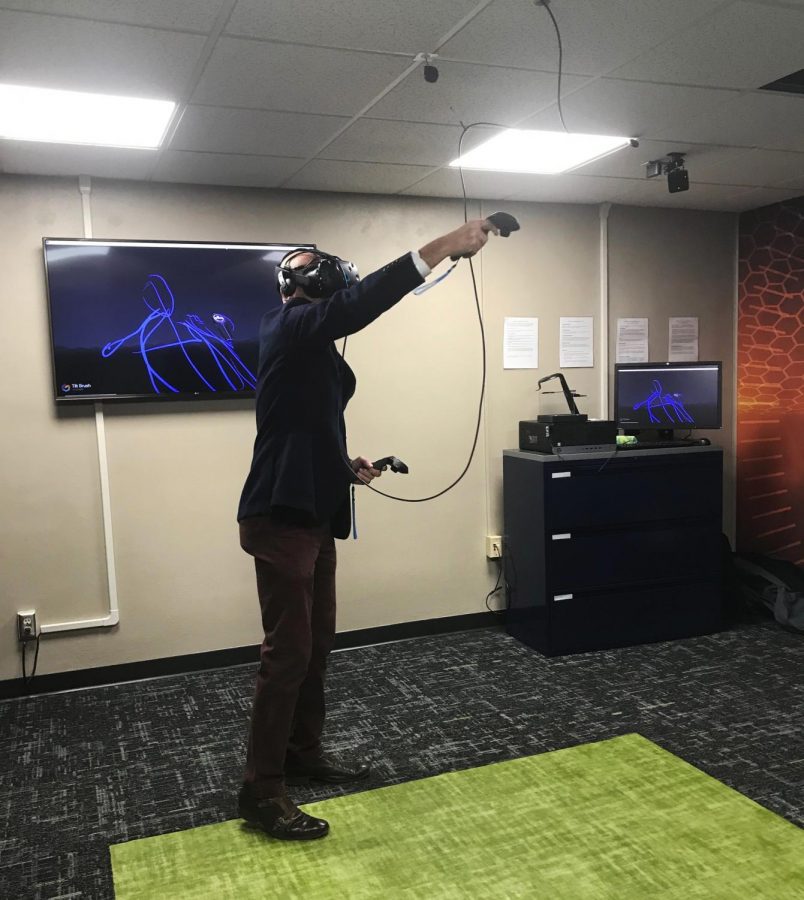 Distinguished lecturer Richard Moninski gave a demonstration on Tilt Brush, one of the many programs that the new Karrmann Library Virtual Reality Room 346 has to offer.  The goal of the open house was to generate knowledge of the VR Room and show how everyone can benefit from this new and emerging technology. The VR Room will allow instructors to deliver hands-on content like never before.

VR is the use of computer technology to create a simulated environment.  Unlike traditional user interfaces, VR places the user inside of the 3D experience, instead of simply viewing the screen in front of them.

“It’s really cool to make that jump into the third dimension. Until you figure it out in a physical sense, it’s really odd to experience,” distinguished lecturer Richard Moninski said.

Programs presented in the VR Room Catalog include but are not limited to:

– Calcflow: Recommended for anyone who loves math, this program allows users to manipulate vectors with their hands, explore vector addition and cross product. Users can see and feel a double integral of a sinusoidal graph in 3D, a Mobius strip and its normal, spherical coordinates and more.

– Everest VR: Recommended for anyone that enjoys a good adventure, this experience lets users explore what it feels like to hike Mount Everest through a sequence of immersive first-person locations as they strive to reach the top of the world. Its incomparable visual fidelity combined with player agency in the VR journey make it real and emotionally stunning.

– Fantastic Contraption: Recommended to anyone with a creative side who loves a good puzzle, this is a surreal building game that allows users to create life-sized contraptions as tall as they can reach. They can send these contraptions whirling, flinging and trundling off to solve puzzles on the other side of a floating island. There are no right or wrong answers, leaving lots of room for creativity.

– Star Chart: Recommended to anyone interested in space, this ultimate VR experience allows users to build their very own Planetariums. Users can explore the Solar System and night sky in an accurate real-time simulation.

– Tilt Brush: Recommended to anyone with a creative side, Tilt Brush lets users paint in a 3D space. With 3D brush strokes, stars, light and even fire, users can unleash the creativity of their imaginations using the room as a canvas. The possibilities are endless.

– Rome Reborn: Recommended to history buffs, this experience allows users to travel back in time to see the Roman Forum at the peak of ancient Rome’s splendor. The Forum was the center of the ancient city where major law courts, government buildings, temples of the state religion and historic monuments were located.

– Mocove Arts VR: Recommended to art lovers, this experience allows users to explore the top one thousand pieces of art from human history at the Mocove Arts virtual museum.

– The Lab: Recommended to people who enjoy science, this lab is a compilation of Valve’s room-scale VR experiments set in a pocket universe within Aperture Science.  Users can fix a robot, defend a castle, adopt a mechanical dog and more.

– Nefertari: Journey to Eternity: This experience makes history and art come alive by letting the user step inside Nefertari’s tomb and immerse themselves in the story of its art, history, construction and mythology through interactive elements.