: International students hosted community event to bring awareness of countries around the world. 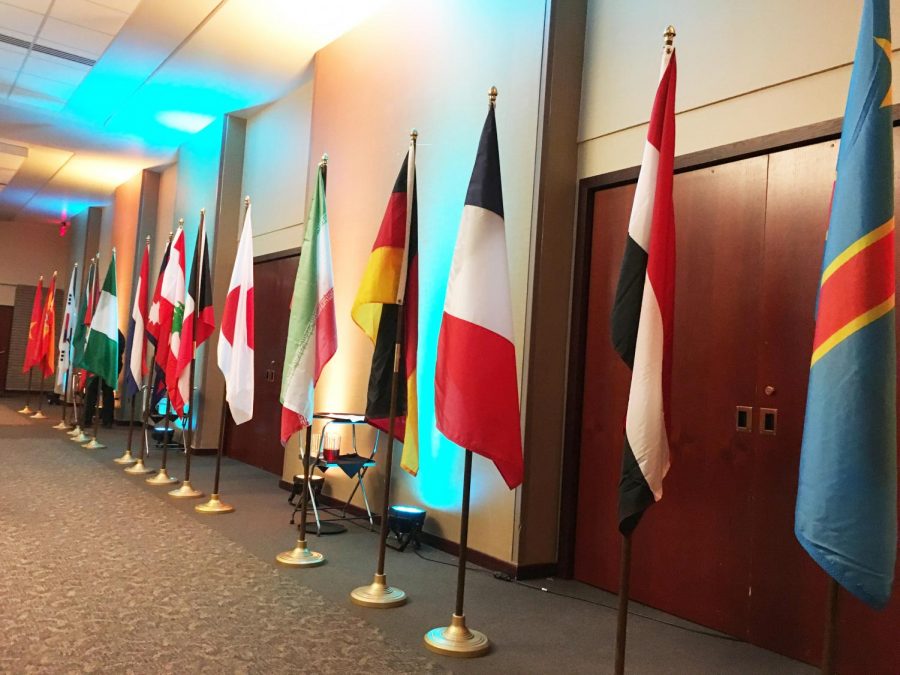 The University of Wisconsin-Platteville International Club hosted the 54thannual International Night. The theme for this year was “Pioneering Relations Among Nations”. Countries with only one or two students studying at UW-Platteville were highlighted in song, food and culture.

The International Club will be celebrating its 83rdanniversary in 2019, and annually, UW-Platteville has approximately 150 international students and scholars studying on campus.

“International Night is the biggest event we have during the academic year, and it is a chance to let community members know about the number of international students on campus. This also helps to make Platteville a welcoming community, and share the cultures we have from our students with local people in the community,” senior industrial engineering major and president of International Club Bassam Alshammari said.

The event started out with the global fair, an opportunity for the international students to share interesting facts and cultures with the campus and community. Students created posters to represent over twenty countries on topics such as transportation, cultural traditions and fun facts. Some of the booths even offered to write individual’s names in their native language. The global fair allowed for students to showcase their home countries and share pieces of it with the Platteville community.

“I hope this event highlights all of the abilities and talents of the international students we have here, and how positive impacts can really help us grow as students,” sophomore mechanical engineering major and International Club secretary Sean Boekhoudt said.

Following the global fair was the parade of flags. The flags represented the home countries of our current international students and each were carried, waved and presented with an interesting fact about the country. The countries presented ranged from France and the Netherlands to Nepal and the Democratic Republic of the Congo.

“I came to [International Night] to learn about the different cultures and the various countries that some of our [UW-Platteville] students come from. I also, of course, enjoyed the really great food,” senior environmental horticulture major Josh Cota said.

Chancellor Dennis Shields then gave some opening remarks for the event, saying that International Night is one of his favorite events on campus all year because it showcases the best of UW-Platteville’s international efforts. Chancellor Shields also said that one of his favorite things about being the chancellor is the international travel opportunities to meet the sister countries and gain a better understanding of the schools that UW-Platteville partners with. He thanked all of those who helped to create the event and wished everyone the best.

Dinner and dessert were served as a student band named Bhaye-Raag performed two songs – one in Chinese and one in Nepali. The members of the band were Himanshu Mallick, Youkuan Yan, Jose Martins and Jarrett Alan Schnaare. Some of the dishes being served were beef and mixed vegtable spring rolls, bunuelos bolivianos and chicken with rice.

“I really liked the food; I think that was one of my favorite parts of the event. I also came to support one of my friends in the Global Explosion dance team, so watching him dance was another highlight of the event,” senior psychology major Amanda Richie said.

A game of Kahoot was played after dinner, asking trivia questions about landmarks, flags and facts of major cities across the globe. And finally, after dinner and trivia, the much-anticipated Global Explosion dance group performed a few songs. This is a dance group that was formed a few years ago by a some of the students in International Club, and they continue the tradition each year.

International Night serves not only to inform our campus and community about the international program at UW-Platteville, but also to provide a time to celebrate the students who are on campus, many of whom have traveled thousands of miles to study here.

“My favorite part of International Night is being able to be in a place where people from everywhere are around you, but you still feel like family connecting in that way. I also think getting to know everyone’s culture and getting to try different food is one of the best things we have in college,” freshman criminal justice major from Nepal Mallick said.

The night ended with more music and performances from student groups and the feedback from the audience seemed to be positive.