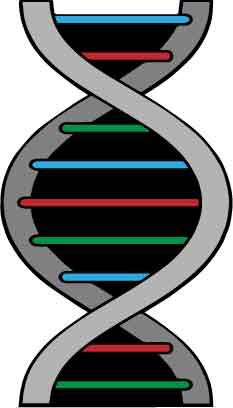 Dr. Mark Levenstein began this Pioneer Talk with a presentation on CRISPR and gene editing. Dr. Levenstein earned his PhD in Biology from the University of California-San Diego and is now a professor in the Department of Biology at the University of Wisconsin-Platteville.

Levenstein explained how bacteria defend themselves from viruses with an adaptive immune system to fight the constant threat of infection. Viruses try to force bacteria to create more viruses by injecting their DNA into the bacteria. Because of this, bacteria have developed a defense that detects foreign DNA and sends a “bomb” to break it up. After the threat is broken up, the bacteria insert a bit of this foreign DNA into its own genome. This process may seem counterintuitive, but Levenstein explained it as, “keeping your friends close and your enemies closer.”

The bacteria brings this viral DNA into an area of its genome called the Clustered Regularly Interspaced Short Palindromic Repeats (CRISPR) locus. This viral DNA is then used to prepare for a new round of infection. The cas genes, which are CRISPR associated, are turned into proteins during the next attack, and the CRISPR locus produces RNA strings to identify the viral threat.

Levenstein compared this process to the way that human memory works. The cas proteins interact with pre-crRNA to create an RNA guided targeting system to find the viral element and match it with the viral DNA from a previous attack, then destroy it.

In August 2012 scientists discovered that if you cut DNA within an organism, that organism has a system to repair the DNA called non-homologous end joining.  It does a “half-hearted” job of patching up the hole in the DNA, which can lead to mutations. However, this discovery meant that scientists could knock out a gene and study the results, targeting any gene they really wanted to cut out.

In February 2013, different scientists discovered a second repair system, which Levenstein described as “the higher-end carpenter.” This system provides overlapping pieces of DNA on each side of the cut, allowing the material to be slipped right in. The gene is then a perfect match for the one that was cut. This repair system allows for anything to be slipped into the genome if it is surrounded by the same overlapping material.

In November 2018 a Chinese scientist claimed he had been the first to genetically modify babies using CRISPR, which brought up the question of ethics; was this crossing the line? In March scientists called for a global moratorium on gene-editing babies and decided that it did cross a line.

“This technology is not one to put back in the box…we just have to use it respectably,” Levenstein said.

Christopher K Tuggle, a professor of animal science at Iowa State University, presented on how he and his research team are using CRISPR as a tool to improve a genetic model. He began by explaining what a SCID is. SCID is Severe Combined Immune Deficiency; in other words, a SCID is an organism that lacks a functional adaptive immune system.

SCID has been artificially created in mice, rats and pigs, but ISU has the only naturally occurring form of SCID in their SCID pigs. If these researchers can put in new cells and an organism’s body won’t reject them, they can study the way those cells react in an in vivo environment. They can study the development of diseases such as cancer and try for a cure.

Tuggle has led research with the ISU SCID pigs on cancer xenografts, trying to demonstrate that an ovarian cancer cell line can survive in the SCID pig model. He has also led research on human skin grafting, trying to test whether human skin can graft onto injured pig skin.

If human immunity can be created in the SCID pig, then the implications for finding cures and new medical methods are invaluable.