Pioneer Players give a killer performance at the CFA for the Platteville community. 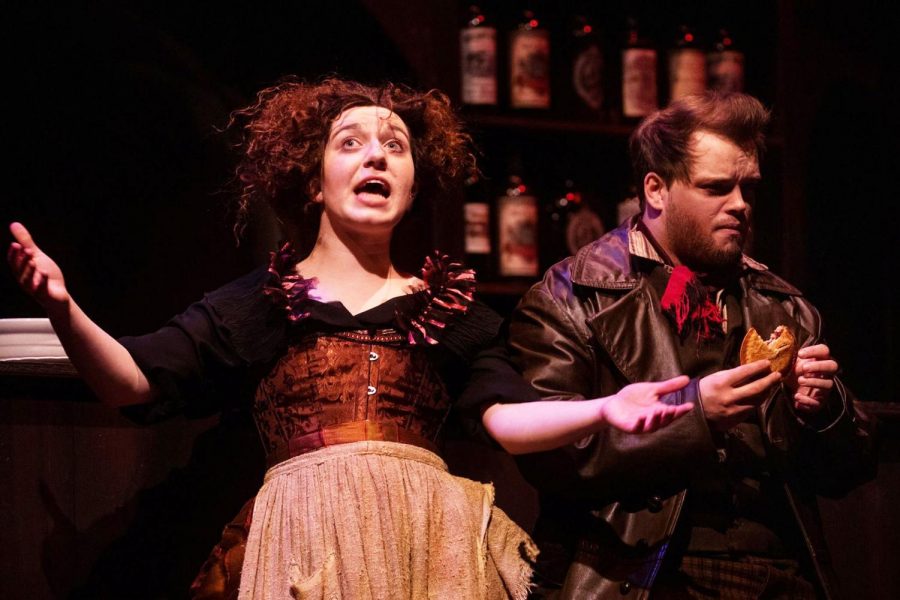 The Pioneer Players performed an adaptation of “Sweeney Todd.” This play is based off the Penney Dreadful version that came out in 1846 and continued to 1847. The storyline follows Sweeney Todd, an exiled barber who returns to London set in the nineteenth century. Todd returns seeking revenge against the judge who unjustly sentenced him to jail and took advantage of his beautiful but naïve wife. Upon Todd’s return he discovers that his wife is gone, his daughter is in the care of the same judge who exiled him and that the judge plans to marry her.

“I think my favorite scene was ‘Not While I’m Around.’ it was a really nice change in pace near the end of the show, and it was nice to not have all the weight on my shoulders for a second,” actress of Ms. Lovett Blair Schuler said.

Ms. Lovett is the pie-shop owner who was in love with Todd, willing to risk it all for him. She gives him the room above her pie shop where he can open his barbershop. The duo ends up killing several townspeople throughout the show, cooking their remains into meat pies in order to cover their tracks. The community suspects nothing and loves the new meat pies.

Margret Jonas, a French professor on campus, explained that she thought the overall theatrics of the play were done extremely well and that the musical aspects of the play were phenomenal. Her favorite part was the loving moment between Ms. Lovett and Toby, when they sang about how they will take care of each other.

“Having to balance the tricky music with the complex and scatterbrained nature of the character was challenging and exciting, then I got to throw in an accent on top of it! I really had to take the show one song at a time, and go through all the curiosity and excitement and fear and love with her every night,” said Schuler.

The play opens in a crowded bar where patrons are arguing over which play they should perform. This adaptation suggests that the rendition of Sweeney Todd was a metadrama, or a play within a play.

“I loved coming to rehearsals every day and knowing that I was so supported by everyone in the cast, knowing something would happen that would make me smile. We were a family, and it was just amazing to have that,” said Schuler.

Sweeney Todd ended with almost every character dying except two; the actor who played Todd ended the play by slitting everyone’s throats and walking out of the door. The play was filled with many suspenseful moments that left the crowd on their toes until the very end.