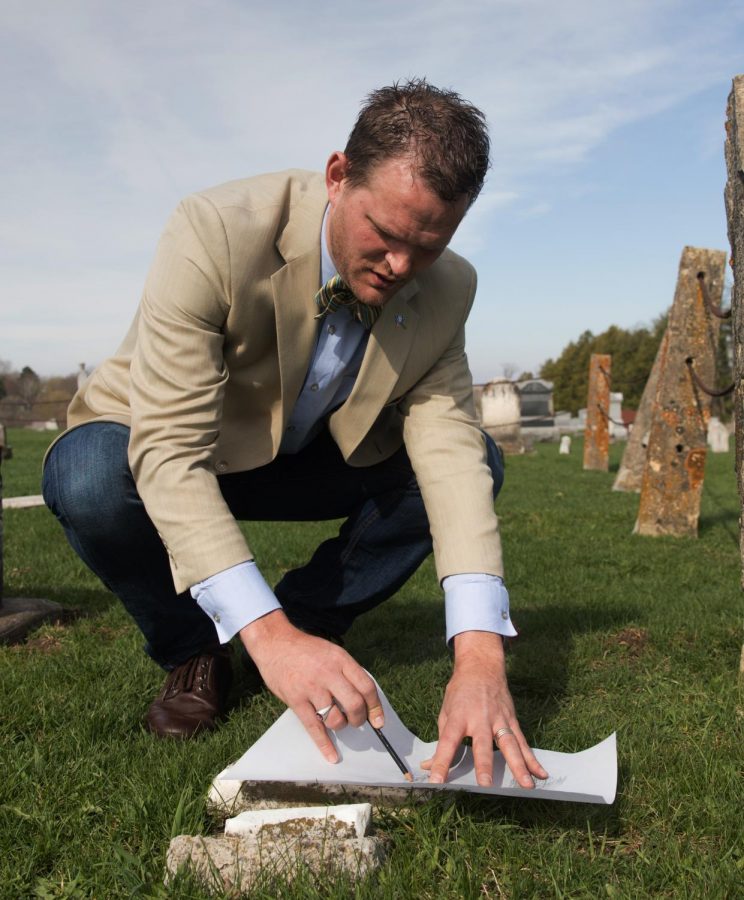 Dr. Eugene Tesdahl, assistant professor of history, will be partnering with the City of Platteville, the Grant County Historical Society and students this summer to restore the headstone of Rachel at Hillside Cemetery in Platteville. Platteville’s founder, John Rountree, illegally enslaved Rachel and buried her with his family at her death in about 1854. Some three years ago, Rachel’s headstone was inadvertently broken by a lawnmower, so it is Tesdahl’s goal to fix the broken stone so Platteville can properly remember and respect Rachel.

The small white marble gravestone placed in the Rountree grave plot is pale and brittle. It is marked with a single capital “R” followed by a period. This is all that marks the stone, as the enslaved typically did not have their birth date, death date, nor family name engraved on their headstones. Nonetheless, this stone serves as a reminder of a Platteville legend.

“[I] believe this is a really important [head]stone, and Rachel was a remarkable woman,” Tesdahl said.

Rachel was brought to Wisconsin with John Rountree in 1828, a wedding gift for his wife, Mary, with the promise of freedom in the near future. Unbeknownst to Rachel, though, Rountree planned to keep her for almost twelve years. Rountree also enslaved mother and son, Maria and Felix, in the 1830s. It was not until 1841 that Rachel was officially declared a free woman, but to keep herself protected, Rachel continued to live with the Rountree’s until her death in 1854.

What is not known to many individuals is that, many times, former slaves would continue to live with their previous owners to ensure their safety. Dr. Christy Clark-Pujara, associate professor of history and Afro-American studies at the University of Wisconsin-Madison, said that the safest thing for free black individuals to do was to stay with the former owners because they could keep them safe from kidnappings and assaults.

“The safest thing for her [Rachel] to do was to stay with the Rountree’s,” Clark-Pujara said.

After her death in 1854, Rachel was buried in the same plot as the Rountree family. Many people mistake this as a sign of affection from the family, but it is actually just another way to show that the Rountree’s still had ownership over Rachel, even in her death. To make matters even more defining, the Rountree plot is surrounded by a thick, black chain – literally binding Rachel to the family.

“Even in death, Rachel is still surrounded by Rountree’s. She has never truly been freed,” Tesdahl said.

In an effort to remember Rachel, Tesdahl is working with the City of Platteville and others to preserve this important piece of Wisconsin history. Bids are currently being taken from memorial restoration firms to ensure restoration and repair of the stone is done with best practices.

Preserving Rachel’s stone should be complete over the summer with Tesdahl’s History of Wisconsin class that will further research Rachel. The City of Platteville is supportive of the decision Tesdahl makes, and the restoration will start in July 2019. A ceremony honoring Rachel will take place in fall 2019 after restoration work is complete.