University of Wisconsin-Platteville students present on their history research. 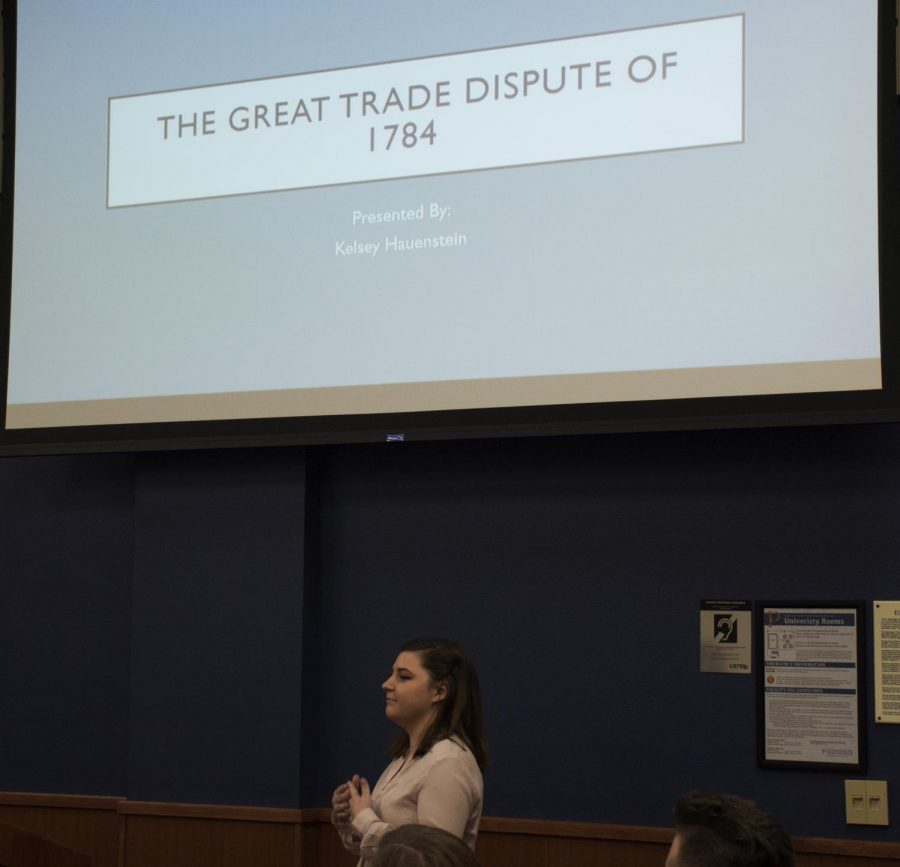 The University of Wisconsin – Platteville History Department and History Club held the 5th Annual History Symposium. The history symposium was created by students for students to share their research.

“It’s nice to know that other people go through the same struggles that I do and that their hard work pays off because sometimes, we don’t get recognition for the work that we do,” junior history major Kelsey Hauenstein said.

The first presenter was Hauenstein, whose research was on “the Great Trade Dispute of 1784.” Hauenstein conducted research using primary documents on loan from the University of Wisconsin–Madison. She got to read actual, authentic letters written to and from Alexander Hamilton.

She explained that upon reading the primary documents, she found a bit of a mystery within the pages. The story began with Hugh Seton, a merchant from London in 1784. He wrote to Hamilton in search of a lawyer, and Hamilton agreed to help. Seton had sold a shipment of wine to a man named John Wilkes. Wilkes said that the wine did not arrive on time, and that the quality was not up to his standards. Because of this, he refused to pay. There were some holes in Wilkes’ story, though, leading Seton to believe that he was being scammed.

Wilkes got a lawyer, and Hamilton suggested that Wilkes be arrested, even though there was no ground for it. Wilkes was arrested, but Seton still did not have his money; a Mr. McAdams took the money to London and hid it for Wilkes. Seton could not provide an account of sales, so he could not prove that he was being scammed.

At this point, Mr. Wilkes gets a new lawyer. This is where the plot gets interesting; his new lawyer was Aaron Burr! New York, 1785, Aaron Burr committed to Wilkes and the case dissolved. Wilkes got out of jail, and justice was not served. One of the last letters that Hauenstein could find on this subject was from Hamilton to Seton, in which he apologized and expressed that, while he wished that there was something he could do, he had to move on from the dead case.

Hauenstein wrapped up with an important question; what happened to Seton? This story demonstrates how the little guy can get lost in history. She tried to find records of Seton after this case, but there just are not any. Seton seemingly lost 800 pounds (currency) and saw no justice from this case – did he ever recover?

The next presenter was Abigayle Pignatari whose research was on “Women in Leadership in Post–Conflict Societies: What has led to change in Sub – Saharan Africa.” Pignatari first defined post–conflict societies as, “conflict situations in which open warfare has come to an end.”

Pignatari shared that these societies see stronger female representation of women in parliament because of the changes in traditional gender norms, quotas and new legislation. After conflicts, women have to fulfill the roles that had previously been held by men, as most of those men are either dead or imprisoned. Women make up about 28% of national parliament seats, but about 49% of the total national population.

Pignatari focused on Rwanda, pre- and post-genocide. She shared that, due to imperialism, women in pre-conflict societies held weaker roles. In the early days of Rwanda’s independence, 16 women held a place in politics. Women also gained the right to join the military. Both of these gains required women to think about their rights.

The third presenter was Garrison Ledbury, whose research was on “The Walleye Wars: Spearfishing and Native Sovereignty in Northern Wisconsin.” Ledbury also conducted research on primary documents from UW–Madison.

Ledbury explained that the 1978 Voigt Decision and Judge John Doyle took away the right of Ojibwe to spearfish, invalidating their treaties with the government. This decision was overruled in 1983, causing tribal identity to surge. The Ojibwe began to push for sovereignty; they had seen how easily their rights could be taken away.

When it came to the Walleye Wars, Ledbury connected the dots between economy, racism and sovereignty. The economy in Wisconsin was weak, and people were looking for someone to blame. Companies and mineral mines were buying up cheap land and choking the water supply with toxins.

Ledbury shared that Stop Treaty Abuse and Protect American Rights and Resources were racist movements trying to pour blame onto the Ojibwe for the lack of fish in the lakes and rivers. The Walleye Wars cut fishing by 60%, which was detrimental to the Ojibwe.

There is always a bit of hope, however, as Ledbury explained the American Indian Movement of Pan-Indianism and the Witness Program.