Why Notre Dame de Paris and its artwork matters in our modern society. 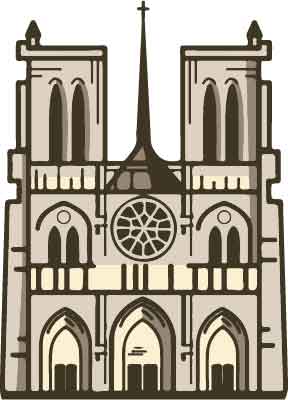 Notre Dame de Paris was built almost 900 years ago and has had an intrinsic role in many key moments of French history and it has captured the imagination of millions around the world. It is a symbol and visual embodiment of French history, culture and religion. On April 15 the cathedral caught fire during restoration work and pieces of the cathedral were destroyed. Last week there was an editorial on why money for the rebuilding of the cathedral should go towards something else, but I argue otherwise.

The aftermath of the fire has hit so many people emotionally. Because of this, a remarkable amount of pledges from around the world, including those from some of the wealthiest families in France have been made. Before these people even pledged money to the cathedral, Notre Dame had millions of dollars already set aside by the government for future restorations to occur because we like to preserve the art and architecture from our past. So far, more than 1 billion euros (1.2 billion dollars in US currency) have been promised toward what is expected to be a lengthy effort of reconstruction.

Last week’s editorial by Brandon Snyder focused on the rage coming from the fact that so much money is being raised. One early estimate by French construction economists suggests that the donations may far surpass the cost of repairs. Amidst this wave of generosity, critics have argued that the money could might be better spent elsewhere. But, those collecting money for the repairs are urging people to keep donating, saying a price cannot yet be put on the work. Because the cathedral has a separation of church and state (laïcité) dating from the Revolution, the state can only support the restoration of the exterior, for the interior is sanctioned with one type of religion. While state funds can’t help pay the full cost, the cost of rebuilding would still be lower than what crisises in the US would be, as stated in the editorial last week.

Last week’s editorial stated that the money should go towards projects like fixing Flint Michigan’s water supply. Firstly, France should not be held responsible for the infrastructure or the lack thereof in the United States. Secondly, to fix the water supply in Flint would cost far more money than to fix Notre-Dame. To fix the cathedral, 20 million dollars would be put into the securing of Notre Dame, 45 million dollars would be put in to replace the roof and framework and 400 million dollars put in to work on the masonry consolidation and restoration. While that’s all that would be put into the cathedral, Governor Rick Snyder at his Lansing office stated, “[W]e’ve heard from millions up to $1.5 billion. We’re doing assessments right now to see what it’s going to cost.”

The rebuilding of the Notre-Dame de Paris cathedral represents the rebuilding of a historical icon of architecture. Rebuilding the cathedral is like rebuilding the White House, they both stand for something in their own way. Either historically or symbolically, saying something like we should not rebuild a cathedral is like saying we should just give up on buildings and art altogether. Without these buildings and art, there would be nothing for us to call home or for us to show.