Editorial: We have always had to protest 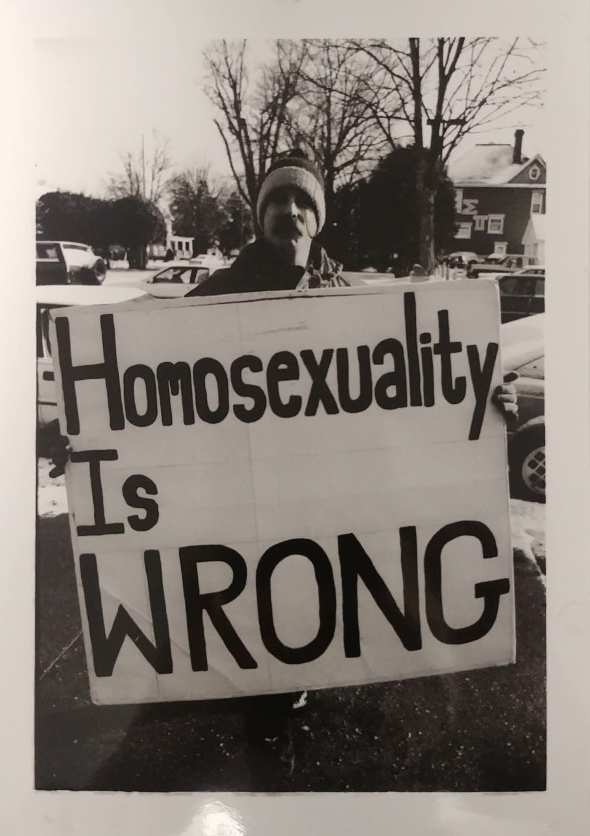 A protester marches outside of the UW-Platte- ville Student Cen- ter on the morn- ing of the visit from Rep. Steve Gunderson. This file photo from The Exponent on December 5, 1996 shows one of the anti-gay signs that greeted the recently outed Congressman.

Albert Camus once wrote, “If the only history of human thought were to be written, it would have to be the history of its successive regrets and impo- tences.” As a summation of his belief in the absurdity of human experience, this quotation feels like a universal commentary on the way in which the same story seems to repeat itself anew with each new generation in an endless cycle. Or, put another way, we will inevitably re-fight our parents’ battles and we will again find ourselves facing the foes we once thought we defeated but which, though briefly silent, have never fully disappeared.

Last week, Brandon Snyder wrote an impassioned response to the regular visits of a traveling preacher who stakes out a space in the free speech zone of public universities to spread a message of hate and intolerance. Snyder called on our campus to consider active measures to protest the vitriol spewed by that preacher. His words were the necessary fire of a person staking out their ownspace to say we have the right to exist in this world. His words reminded me of something LGBTQ+ activist Marlon Riggs once said: “It is necessary to con- stantly remind ourselves that we are not an abomination.” It shouldn’t be neces- sary, but it is. And neither Brandon nor Marlon are the first to shoulder the burden of making that point.

Nor was last week, nor was last semester the first time this campus has hosted voices of hate. In 1996, anti-gay protesters converged on this campus to voice disdain for Representative Steve Gunderson (R), a gay congressman and Wisconsinite outed on the floor of the United States House of Representatives in 1994. Protesters held signs that read “Homosexuality is wrong” and “Christ can set you free.” Gunderson was on campus to discuss agricultural policy; his visit was also a farewell visit as he was retiring from Congress that year.

Similar signs and language have been the long-established calling card of the Westboro Baptist Church, which often carries incendiary signs with slogans like “God Hates Fags,” even to the funerals of victims of anti-gay hate crimes.

Over and over, in different towns on different campuses, this kind of hate resurfaces and has its moment, demands our attention, and challenges us to take action. And we have. From the Compton Cafeteria riots to Stonewall, from blocking Westboro protesters from media coverage with giant angel wings, as students did in Laramie, Wyoming, to student-led kiss-ins like we used to do in Mississippi, where I went to school, when we had our own itinerant preacher yell at us from his soapbox, the LGBTQ+ community has a long history of speaking back to the hate that seems to spring eternal in the world around us. Even a simple editorial in a small university newspaper is part of the bigger activism that has come to define who we are and how we refuse to sit quietly.

Some of this history students and faculty may not even know about. Per- haps you could swing by the Doyle Center and check out their bulletin board in the first-floor hallway in Warner laying out some of these significant events in LGBTQ+ history. If we don’t recognize this history of resistance or if we fail to recognize how we can have a place in it to affect our own change, then we are doomed to the cycle of repetitions and impotences that make the world feel at times so absurd.

If you walked by that hate-spewing preacher a couple weeks ago and hoped you could ignore him or had no idea how to respond to him, then accept a simple challenge: go to an event on campus dedicated to understanding the differ-ences that preacher made into the dragons of contempt to sic on our entire campus community. Hosted by the Doyle Center, Stop the Hate, Students against Gender Violence, the Alliance or other groups, there is a growing abundance of events on our campus that promote understanding and acceptance.

We are all responsible for responding to hate. We cannot relegate it to the past. We must face that it will return in the future. But we can prepare for it. We can learn more now. We can dedicate ourselves to diversity. We can remind ourselves, all of us, LGBTQ+ and otherwise, that none of us are an abomination. We are all Pioneers.