A worthy fight against this invasive plant species 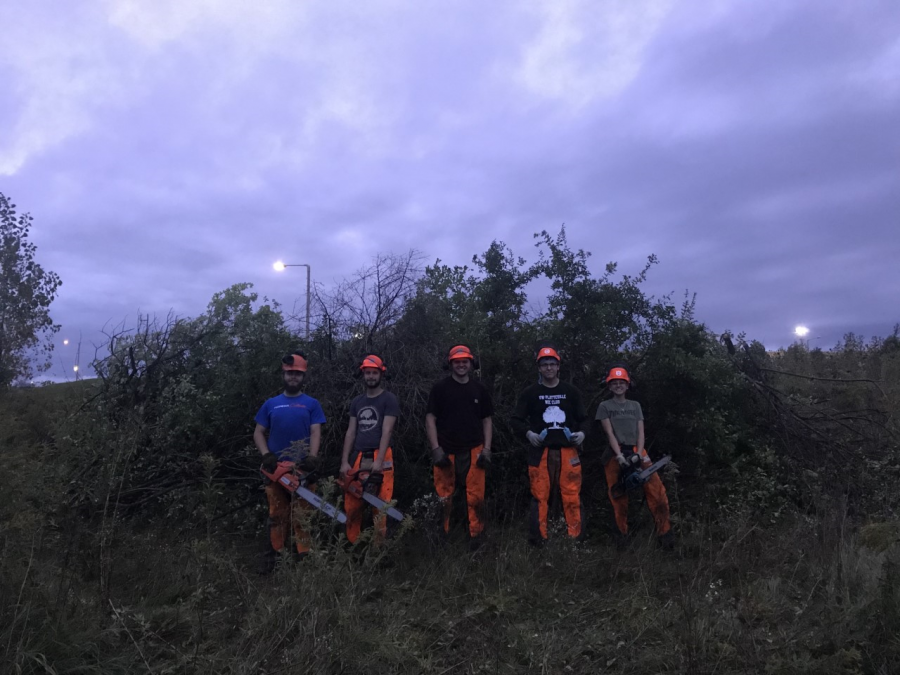 On multiple days within the past weeks, the University of Wisconsin- Platteville Reclamation, Environment and Conservation Club (REC) fought back against the invasive honeysuckle along the Platteville Trail System.

Honeysuckle provides a challenge for the Platteville Arboretum, the organization responsible for the maintenance of the trail system. Honeysuckle is not native to Wisconsin; the plant has no natural role in the ecosystem, allowing it to grow quickly and uncontrollably along the trails.

However, the REC Club partners with the Arboretum to ensure the honeysuckle does not destroy the native vegetation.

Alex Belisle, Vice President of the REC Club, commented that, “our club’s relationship with the Arboretum and the various natural stewardship organizations in Southern Wisconsin is a two-way road.”

Belisle continued, “The Arboretum donated some money to the REC Club to help students take classes to learn how to chainsaw. Part of the deal was, for the students that use that money to take the class, they immediately have to put what they learned into experience.”

The chainsaw course includes education on safety and equipment and requires an additional 40 hours of volunteer service. Participants who complete the course receive a federal chainsaw certification.

The next chainsaw course may occur sometime in November or December, according to the REC Club.

The first workday on Tuesday occurred behind the campus garden and served primarily as a practice and introductory day.

The second workday on Sunday put the newly found skills to the test. The work crew drove out to part of the Rountree Trail behind Walmart and Menards. Combined, the two workdays have totaled to over 30 hours of work.

Madi Belland, Secretary of the REC Club, remarked that “the site along the Rountree Trail requires roughly 16 more hours.”

Belisle and Belland concurred that approximately 2,000 pounds of honeysuckle were removed during the workday on Monday.

Belland explained that, although not preferred, herbicide is necessary in preventing regrowth of the honeysuckle. The herbicide is absorbed into the plant, both killing it and preventing it from last-minute sprouts. Oftentimes, the honeysuckle surrounds itself closely with short, stubborn branches. The club gave workers helmets with face shields, earmuffs and leg chaps to protect them.

The group operated in a small area of approximately 2500 square meters, spacing themselves from each other safely and efficiently. Among the group were second-time workers and freshmen Eli Moore, Dani Goomey and Alex Waters. According to the three, cutting down and hauling honeysuckle serves to be “a great workout and an incredibly fun activity.”

The work done to remove the honeysuckle merits more than therapeutic chainsawing. In working as a team, participants and members of the REC Club build their skills in teamwork, knowledge of the land and effective work ethics. At the end of the day, the work crew happily drove away as one cooperative team, bound by the single goal of improving the flora and fauna around them.