Flashback from the Archives: JFK campaigns in Platteville 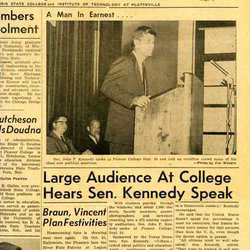 On Sept. 24, 1959, president-to-be John F. Kennedy visited Southwest Wisconsin on his campaign trail. The following is an excerpt from his speech here at the university.

“It is a pleasure to be in Platteville. I wish, however, I could come to you with some assurance that the surrounding farms will not suffer this year as they have so many times in the past from depressed prices — that the hog prices will rise to a level that makes it possible for the farmer to keep pace with the increasing cost of living.

“There is no better example of the lack of imagination and leadership in Washington than the helpless attitude toward hog production. With prices at the $13 level and sinking toward the disastrous $10 level received by producers four years ago it is shocking to note the absence of positive action.

“Contrast this with the attitude of the Democratic administration eight or nine years ago when a similar calamity approached. The Democratic Secretary of Agriculture quickly initiated a hot lunch purchase program. It both halted the slump in prices and helped improve the diets of many needy families.”

The podium seen in the photograph to the right is kept in the UW-Platteville archives in remembrance of the future president’s visit.