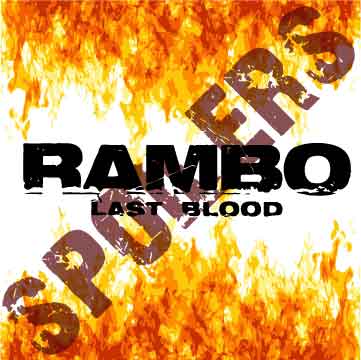 This fifth installment of the Rambo franchise is probably one of the most grueling, blood-splattering movies of its time.

“Rambo: Last Blood” is set in the Arizona desert where John Rambo, a Vietnam War veteran, raises horses and maintains a ranch. During this movie, Rambo has a special bond with a woman named Maria and her granddaughter Gabrielle.

Treating Gabrielle like his own, John Rambo decides to host a sendoff/graduation party with her friends in the tunnels that span throughout the ranch. John Rambo allowed no one besides himself and Gabrielle into the tunnels, so this was quite the privilege.

Following the party, Gabrielle confronts Rambo on why her father left after her mother died of cancer. Gabrielle finds out from a friend living in Mexico that her father is also there. She goes there to meet her friend and confront him.

After meeting him, he acts friendly at first, but Gabrielle brings up the tragedy of her mother. He becomes very upset and slams the door in her face. Gabrielle, crying, goes back to her car where her friend is waiting. Her friend insists that she will drive Gabrielle around to relax her a bit.

Gabrielle is driven to a club in Mexico during the night to have some fun and get her mind off things. With the loud club music and heavy drinking, Gabrielle doesn’t notice when a man roofies her drink. The man kidnaps the unconscious Gabrielle and takes her out of town.

The man is one of two brothers who runs a human trafficking and prostitution ring in northern Mexico. Rambo worries that Gabrielle has been missing for several days, and knew she planned to go to Mexico.

Rambo is furious when he finds Gabrielle’s friend. He interrogates the friend on Gabrielle’s whereabouts, but she denies knowing anything.

Rambo notices that the gold band on the friend’s wrist is Gabrielle’s, given to her by her mother before she died. He grabs the friend violently, demanding answers. She admits to selling Gabrielle to a prostitution ring.

Determined to find the men who kidnapped Gabrielle and bring her home, Rambo scours the alleyways to locate the human trafficking headquarters and eventually finds it; unfortunately, he is spotted by hired watchmen.

The criminals surround Rambo at the end of a road overlooking the rest of the city and beat him to a bloody mess. The ringleader, Victor, finds a picture of Gabrielle on Rambo and decides to send a message by carving a “V” into his cheek. Victor finds Gabrielle and carves a “V” into her cheek as well.

After Rambo’s major defeat, Carmen, an investigator, finds him at the place of the fight and treats his wounds. Carmen keeps Rambo in her home for three days. Rambo asks for her guidance and information on the Mexican city.

Carmen explains that she is trying to bring awareness of the cartel leaders and what they did to her now deceased sister. Rambo finds the layouts of the places controlled by the human traffickers and grabs a hammer, ready to attack.

After beating down a series of guards, he eventually finds Gabrielle in a brothel. She is in a room, drugged by a sedative, which was administered after the first time Rambo tried to save her. After he notices the many needle marks in her right arm, Gabrielle begins flailing, thinking that he was another client.

Rambo realizes that Gabrielle was overdosing on the drug the human traffickers gave her. After calming her down, he rushes Gabrielle to his truck and attempts to drive to the nearest American hospital.

Rambo speeds across the border and begins sharing his favorite memories of his time with Gabrille to keep her awake. As he finishes his most heartfelt story, Gabrielle overdoses and dies.

When arriving at the ranch, Maria says her goodbyes. Then, they bury Gabrielle in the backyard. To get his revenge, Rambo returns to Mexico and hunts down Victor and decapitates him. The next morning, Hugo finds the headless corpse of his brother and a picture of Gabrielle stabbed in the chest. Rambo lets some of his anger out by throwing Victor’s head out of his truck on the highway.

Like every other Rambo installment, he is determined to prepare for the entire ring, or what is left of it, to arrive on his property and end his life. He tells Maria to leave, for the worst is yet to come. Rambo utilizes the tunnels as a series of death traps ranging from metal punji sticks, tiger traps and cartridge bombs.

No one from the Martinez’ cartel is expecting Rambo to be a one-man army, but they become more cautious after the first wave of their vehicles are blown up by landmines. The remaining men storm the tunnels and some head towards the house. Rambo effortlessly kills the remaining cartel members until Hugo is the only one left.

Rambo taunts and threatens Hugo as he wanders the tunnels. Rambo detonates explosive charges, collapsing the tunnels which sends Hugo running for his life toward the barn.

Hugo does not see Rambo as he waits above. Rambo fires four arrows, pinning Gabrielle’s murderer to the wall. Because Hugo figuratively tore out Rambo’s nurturing sense of Gabrielle and Maria, Rambo literally rips Hugo’s heart out with his blade. He shows Hugo his own heart as he dies.

Rambo did not escape the fight unscathed. Although everyone he loved is gone, Rambo promises to continue his fight for justice. The final scene shows Rambo riding his horse towards the sunset.

The film sheds light on the important topic of human trafficking rings. This week is Sexual Violence Awareness Week, which is recognized by University of Wisconsin-Platteville. On campus, we have resources for people enduring such experiences. University Counseling Services, Student Health Services, the Dean of Students, Title IX Coordinator, University Police and more are available to get answers and help.