“The 57 Bus” in a more literary light 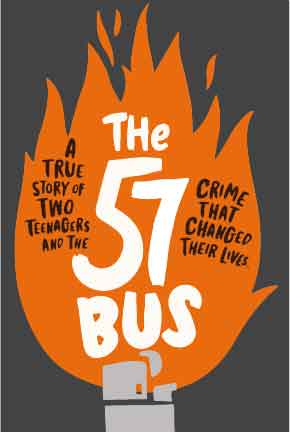 “The 57 Bus”, a non-fiction, young-adult book by journalist Dashka Slater, explores the tragic interaction of two teenagers. Richard, a black teenage boy, sits near the back of the 57 Bus in Oakland, CA, with his cousin Lloyd and a friend Jamal. Sasha, an agender teenager whose fashion statement is skirts, is sitting behind Richard, Lloyd and Jamal, fast asleep.

Jamal thinks of Sasha as male and is uncomfortable seeing a male in a skirt. Perhaps this is why Jamal hands a lighter to Richard and tells him, “Go ahead, you do it,” (that is, light the skirt on fire).

On Richard’s fourth try, Sasha’s skirt becomes a “sheet of flame”. Two men sitting near the middle of the 57 Bus save Sasha’s life. Sasha receives third-degree burns from being set on fire and spends twenty-three days at Bothin Hospital.

It seems like everybody on Earth sends cards and gifts to Sasha.  On the other hand, most people feel hatred and anger toward Richard.

After the incident, Richard says he “thought the fabric would smolder for a minute and then Sasha would wake up and slap it out, startled.” This really grabs your attention because you would think a 16-year old would know that if you set a person on fire, that person would not be capable of putting it out.

“The 57 Bus” revolves around this incident, but the reader also learns a lot about these two main characters.  The reader learns that Sasha attends a small private school, Maybeck, in the “middle-class foothills” of Oakland and has parents who are married. Sasha’s dad teaches kindergarten at a public school and Sasha’s mom is a bookkeeper at a private elementary school.  Sasha was diagnosed with Asperger’s at the age of seven.

Richard, meanwhile, attends Oakland High School, a large public school in Oakland’s flatlands where the majority of the students are Asian, African American and Latino. Richard’s father is in jail; subsequently, his cousins have been living with Richard and his mother since age nine. His stepfather and half-brother also live with them; simultaneously, Richard’s mom struggles to make ends meet.  Finally, readers learn that Richard behaves best in structured environments and sometimes struggles to hang out with people who are not bad influences on him.

It seems that journalist, Slater, wrote “The 57 Bus” in part to educate readers about non-binary people, gender identities, the lives of urban black teenage males and the juvenile criminal justice system.  Readers also learn what restorative justice is through the interesting example of a teenager Jeff, who “slaps or grabs” the butts of three female students at his school.   Given the choice of two punishments, Jeff decides to talk about his inappropriate actions with the people he hurt and learns to act more respectfully.   Through restorative justice, the victims heal somewhat and Jeff actually becomes friends with them.

“The 57 Bus” is written in narrative form, with short sections, and is not what comes to mind for some people when they hear the word non-fiction.  Some people, myself included, think of books that are factual and boring when they hear the word non-fiction.  “The 57 Bus”, however, is interesting because it has well-developed characters and a dramatic plot.  It describes one bad neighborhood in Oakland, California, one of the most diverse cities in the country, which is also interesting.

Even though the parts of the book that talked about gender identity were confusing to me, such as Sasha’s relationship with Nemo, I would still recomend “The 57 Bus” because the type of gender identity it focuses on, non-binary people who identify as agender, does not become a part of the plot of many books.  Finally, I would recommend this book because it gives good definitions of some of the terms associated with gender identity.

“The 57 Bus” is similar to last year’s campus read book, “The Hate U Give” by Angie Thomas, in that both of these books deal with social issues and specifically the issues black men in the 21st-century face. If you liked “The Hate U Give”, you will like “The 57 Bus.”

*Copies of “The 57 Bus” are still availible from the Campus Climate office.