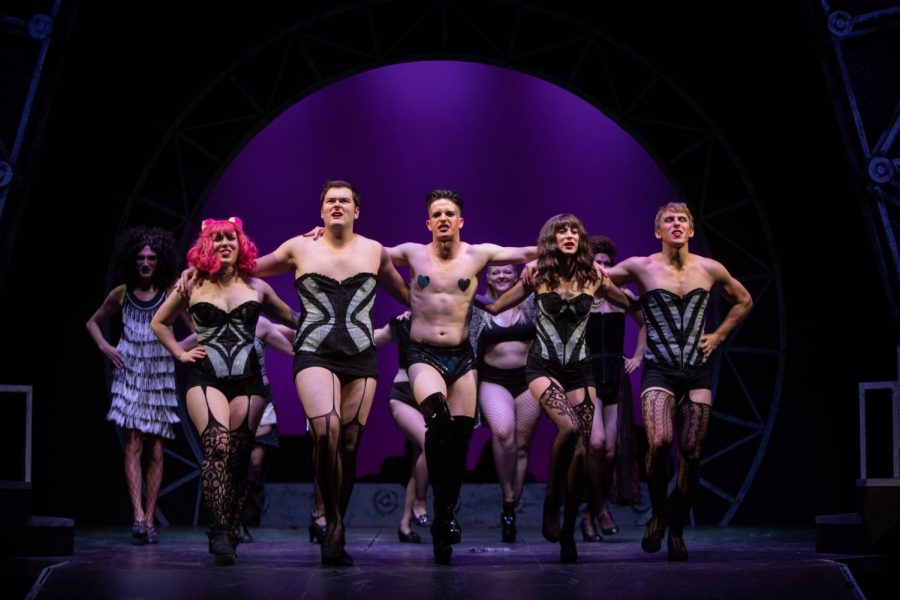 This fall semester, students, faculty and staff members from the University of Wisconsin-Platteville and the Platteville community watched the Pioneer Players’ performance of “Rocky Horror” in the “black box” of the Center for the Arts Theatre.

The performances were sold out on October 31 for the rest of the showings, including the special 11:59 p.m. showtime. Did you do the Time Warp? I mean, it is just a jump to the left, and then a step to the right, you put your hands on your hips, then bring your knees in tight and do the pelvic thrust, which drives you insaaaaaaaaaane

This musical focuses on the concept of gender being “a drag.”

“It isn’t the plot of ‘Rocky Horror’ that has made it into a classic. It is the subversive nature of the performance of gender and sexuality that has drawn people to it for so long. Our production was inspired by non-binary drag performance and what “Rocky Horror” means for a 21st- century audience,” Associate Professor of Theatre and Theatre Program Coordinator Dr. Ann Farrelly said.

Non-binary, according to transequality.org, is the most common term for someone who identifies as neither male
nor female. Additionally, genderqueer, agender and bigender are some other common identity

“We wanted to explore the idea that ‘gender is a drag’ and really confront the notion of the gender binary and confront ways in which expressions of gender are often performative and not normative. More than with just the character of Frank-N-Furter, we played with the idea of drag with all of our characters. Drag performance has always been a form of resistance. Resistance to the norm, resistance to society’s restrictions,” Dr. Farrelly said.

“Because the idea of the gender binary is a myth, which people prove every single day, we wanted to give an outward expression of the fluidity of both gender and sexuality, while also celebrating all of it. People do not fit neatly into the boxes society has imposed on them. Nor should they. This production was also a declaration that you are things that make us different are the things that make us beautiful…that the world holds a place for all of us…that you are important and your story matters. No one should have to live in fear of being who they are. We wanted everyone in our audience to know that we see you…we love you…we think you are glorious,” Farrelly said.

On campus, we have amazing services to offer for everyone embracing their gender as a drag and for their friends supporting them. We have the Patricia A. Doyle Center for Gender and Sexuality as well as University Counseling Services bringing a LGBTQ+ Support Group together on a bi-weekly basis. Please contact Diedre Dalsing of University Counseling Services for location information at [email protected] uwplatt.edu.

The Doyle Center also provides Ally Training specifically dealing with LGBTQ+ education along with terminology for gender and sexuality. They also include ways and examples of how to be a proactive and inclusive ally.