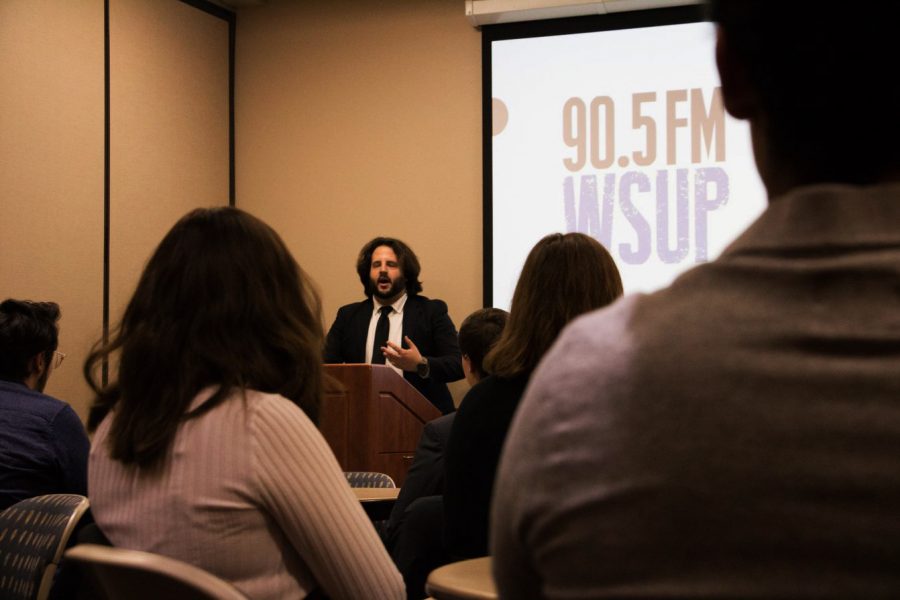 “When people get their on-air certification, from that point onward they are able to go on air completely on their own. They’re able to make and produce their own specialty show or podcast to be put on air,” assistant station manager and ceremony coordinator Gustavo Morales said.

Morales continued that, “They can also train other people after one semester, but the big thing is they’ll be on-air certified, have access to our social medias and they can use all the resources we have for them.”

In order to complete the process, potential air jocks must pass a knowledge test as well as shadow certified jocks in three varying categories.

The trainees must follow an already-certified jockey through their own special show, observing the jockey’s personality, airtime usage and song library. Then, the trainees undergo two quality shadows, in which they workshop and refine their own performance and on-air skills. Finally, trainees attend a technical shadow covering the mechanics and equipment of the station.

The recent round of new jockeys marks an increase in participation of the program.

According to station manager Vinny Klang, only six or seven jockeys would undergo the certification process, even while radio-related courses existed in the university’s catalogue.

In a speech preceding the ceremony, Klang spoke that “this whole ceremony here was one of Gus’s best ideas. He approached me with the concept of making the process of becoming a DJ more official and more prestigious and to more properly thank you for your hard work.”

He also reminded the jockeys that, “And now, besides being part of listeners’ lives, you are now a part of the ongoing story of 90.5FM. You have all made friends, you have all worked very hard, and you are all creating something the campus station has not seen for a long time.”

Afterwards, the radio station hosted a celebration full of music, fried chicken and cupcakes in its studio lounge.

Each jockey, ranging from the experienced radio station supporter to the new freshmen, hold a different perspective on falling in love with the station.

Justice Hendrick serves as an example of an older student entering the world of jockeyship.

Hendrick, a senior majoring in Professional Writing, has been in-and-out with the station for the past three years. Hendrick commented that “seeing them out, doing DJ stuff during the involvement fair,” caught his interest and that he got involved from there.

In traversing Bridgefest, the two stumbled upon the radio station and, after taking a tour of the station, decided to join and become jockeys.

According to Morales and Klang, if next semester cultivates enough interest, the radio station may offer another on-air jockey certification course before next fall.