The day I saw Blackhawk again 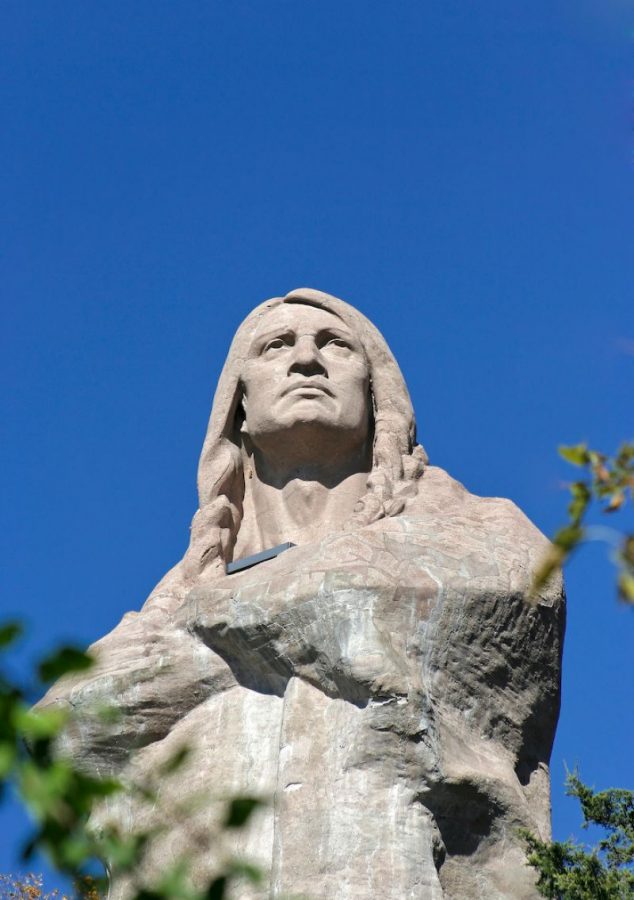 Friday, May 1, 2020 was the first time state parks have been open since COVID-19 forced them to close. I live close to Lowden State Park, home of the “Eternal Indian” statue (Sometimes called “Blackhawk,” since it was inspired by Blackhawk’s life.) This statue overlooks a bluff on the Rock River over my hometown of Oregon, Illinois. Sculpted by Larado Taft, it was presented to the people of Oregon in 1911.
This statue means very much to my town. Our school’s athletic center is actually called the Blackhawk Center. For the last few years, the statue was covered in order to protect it from further damage. This year, the town raised enough money to have the statue restored and uncovered for people to see and enjoy.
When I returned to Oregon at the beginning of the stay at home order, I couldn’t go into Lowden to see Blackhawk. The park was closed, so I couldn’t even drive through the observatory road to see him from my car. The only way to see him was to drive on Route 2 between Byron and Oregon to see him from far away, looking at me from across the river.
Maybe it seems ridiculous to be attached to a statue, but it’s one of the most historic sites in Ogle County, and Northern Illinois. We used to have a festival at Lowden celebrating the Native American heritage in our area. These festivals were first held to start raising money for the statue repairs. There were Teepees that local artists would decorate, and people could rent to camp in them during the festival weekend. At the end of the weekend, there was a big trail ride throughout the town that we rode our horses in; it was the highlight of my childhood summers.
It always brings me joy to talk about my town’s historic sites, and Blackhawk statue is definitely one of my favorite topics. So much so that when I was twelve, I did my biography project on Chief Black Hawk. The project was complete with a puppet that my mom and I spent an entire day putting together. In case you were wondering, I got an A on the assignment.
Being able to return to Lowden and see the statue for the first time in a while was pretty amazing. I forgot how awe inspiring it really was, and how pretty the overlook is over the river. I was really excited to show my boyfriend and explain to him the history of the town and statue, as well as show him the pretty site.
If you ever find your way into Oregon, Illinois, I would be more than happy to show off what this town has to offer in historic sites, as well as surrounding towns and their historic sites. Also, since state parks are open, make sure to get outside and enjoy nature!