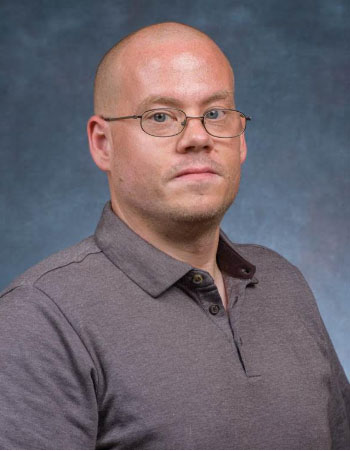 New to UW-Platteville and the Computer Science and Software Engineering (CSSE) department: Assistant Professor Patrick Byrnes.
What is your education background?
Byrnes earned his undergraduate degree in electrical engineering with a concentration in computer engineering and a minor in computer science from Worcester Polytechnic Institute, in Worcester, Massachusetts, in 2001.
After testing the waters and finding his passion for teaching, Byrnes returned to school to earn his master’s degree in electrical engineering from State University of New York, New Paltz, New York, in 2010.
He transitioned almost immediately into his PhD in electrical engineering at Pennsylvania State University, finishing in 2017.
How did you become interested in the field in which you teach?
“I would have to say since I got into Star Trek: The Next Generation. I looked up to Jordy La Forge quite intensely and I was very young when Star Trek: The Next Generation was on, so I was impressionable, but in a good way. So, I was very interested in engineering.”
As a kid, he used to program on his old computer and since middle school, he knew that he wanted to be involved in engineering, hoping to build computers.
How did you become interested in teaching?
“I was not happy with work life. I worked as a glorified electrical engineering technician at some company … occasionally there was some interesting work but for the most part, I hooked up customers’ equipment when they came in for testing. The company did calibration for a bunch of different stuff … but for the most part I ran around with a screwdriver, hooking up electrical wires.”
While also working as a technician, Byrnes was introduced by a friend to high school tutoring. He began with chemistry, math and physics, and later SAT tutoring.
Finding that he enjoyed tutoring, he began to substitute teach. The first class he taught as a substitute was a first-grade class; then, he moved forward to a middle school class.
At this point, one of the high schools asked him if he would be interested in teaching there. In this capacity, he taught a class for students who had failed the Massachusetts statewide standardized math test.
His experience teaching at the high school inspired him to return to his hometown and pursue his master’s degree.
At SUNY New Paltz, Byrnes’s advisor urged him to continue on to his Ph.D., reassuring him that the program was financially feasible and worth the time.
Following his advisor’s guidance Byrnes applied to Penn State and was accepted into their doctoral program and granted funding for his studies.
“I had a nice little apartment there, I got to do what I liked on the weekends, did a lot of climbing, hiking, met a bunch of good friends, and during the week I worked on my Ph.D.”
What brought you to UW-Platteville?
Shortly before Byrnes completed his PhD, his wife, Sarah Getz, completed her Ph.D. as well, and was hired as faculty at Mercyhurst University in Eerie, Pennsylvania around 2017.
Staying in the area with her, Byrnes applied to and was hired as an assistant teaching professor at Penn State Behrend, Eerie, PA.
After three years, Getz was offered a professor position at Idaho State University (ISU), but encountered difficulties negotiating a tenure-track position. ISU did not budge, and both Byrnes and Getz applied for places in the region, finding UW-Platteville among the bunch.
UW-Platteville interviewed and hired the two independently, not knowing that they were married.
In which department will you be teaching at UW-Platteville?
Thought, at first glance, he would seem to be destined for electrical engineering, Byrnes teaches within the CSSE department.
He noted that UW-Platteville had been concerned about his electrical engineering background, going three-for-three in undergraduate, master’s, and PhD in it.
However, his degree titles do not directly display his experience.
While working on his PhD, Brynes worked within the Multidimensional Image Processing Lab, which intertwined electrical engineering, software engineering and computer science together.
He has also been publishing amongst the CSSE academic community, most notably in his latest 2019 publication in the journal IEEE Transactions on Biomedical Engineering.
Have you been involved with any organizations on campus at UW-Platteville, or plan to be involved?
Though not involved in any campus organizations yet, Byrnes heard through the grapevine about the possibility of a frisbee golf club. As he said, he had played on the frisbee golf team at Penn State, and although “it’s been a few years,” he would love to be a part of such an organization.
Byrnes also mentioned his passion for climbing, which he had engaged in as a volunteer instructor while at Penn State, and his continued search for climbing opportunities in the area.
Do you have advice to share with students?
“Treat school like a job, especially if you aren’t working outside of school … you can have a good time, obviously, I was an undergrad, I know exactly what it’s like to be in college … try to focus on school as much as possible during some kind of set time during the week, meet your responsibilities, and then go have a good time.
“Communicate with your professors, let them know who you are. One of the reasons I am in academics is because I like working with students. Make sure to go out of your way to meet your professors, especially now.
“Get an internship, especially important for the engineers… the companies find out that you are reliable, you show up on time, you do good work; you don’t have to go searching for another internship next year, they’ll want you back. It makes your entire experience with starting out your career so much easier.”