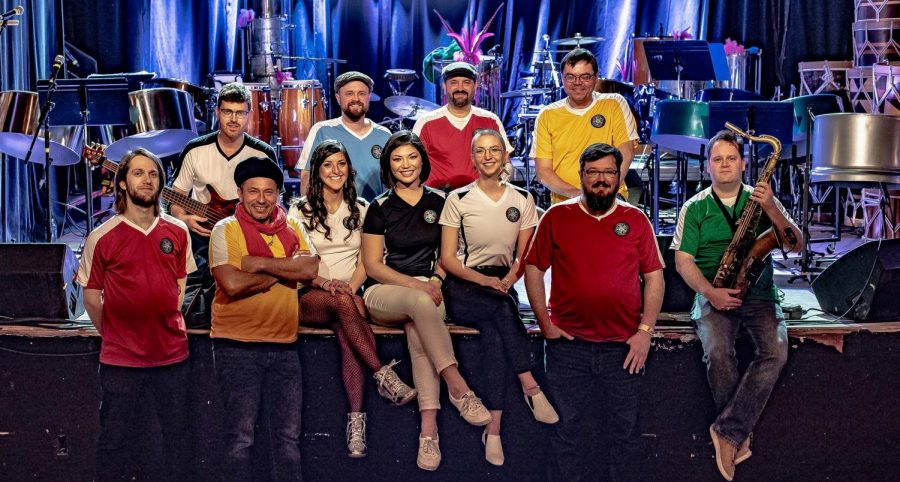 On Feb. 9, Panchromatic Steel performed a live concert in Brodbeck Hall as part of the 2021 Performing Art Series, which they livestreamed via YouTube.
As described on their website, “Panchromatic Steel is a steeldrum band homegrown in Madison, Wisconsin that plays authentic island calypso, jazz, classical and familiar pop/rock.”
The band often cites the importance and rich history behind the steel drum, national instrument of the Caribbean countries Trinidad and Tobago. The steel drum, more commonly referred to as the steel pan, existed in the islands long before World War II. This conflict brought with it greater accessibility for the instrument through the oil trade; as the United States and Great Britain used and haphazardly discarded the common 55-gallon oil drums, musicians discovered that the drums could be adapted as percussion instruments.
Elliot Mannette, a native-born Trinidadian musician, is credited to be one of the first to work with the 55-gallon oil drum steel pan, which she had modified by collapsing the pan to allow more note spots, or indentations on the inside of the drum that produce a certain note. Other pannists followed suit, incorporating the steel drum into their music.
The steel pan continued to expand in its musical importance, eventually earning the treasured title of national instrument of Trinidad and Tobago. Panchromatic Steel, “founded in 2016 by Chad Bartell and Josh Pultorak… strives to honor Trinidad and Tobago’s contribution by respectfully applying the steel pan to a variety of creative music and showcasing it to audiences across Southern Wisconsin.”
The concert opened with a performance by the Pioneer Steel Band, which played two pieces: “Cliff’s Playground” by Yuko Asada, and “Mesa Drive” composed by Emily Lemmerman. A performance of “Now’s The Time” By Charlie Parker followed, performed by UW-Platteville’s Jazz I students.
Panchromatic Steel opened with a warm instrumental piece to set the mood. Next, The band played “The Hammer,” written by David Rudder, with vocal accompaniment by the band’s own Alana Ross.
“The Hammer” laments the passing of a man known as The Hammer, who reflects the musical and social culture behind the steel pan. The story follows his passing, his funeral, and dreams of his life, which coincide with his culture’s legal suppression, the grievances of his people, and the hope for their culture’s ultimate revival and renewal.
Following this was the debut of an original piece, written by Panchromatic Steel co-founder Josh Pultorak, entitled “Reason.” Pultorak composed “Reason” with the French Caribbean musical style Beguine in mind. Linguistically adapted from the Creole language meaning “(female) white person,” Beguine emulates an easy-to-follow composition similar to upbeat rumba or Afro-Cuban music, with emphasis on both the brass saxophone and the percussion vibraphone.
Pultorak then introduced the next two pieces, both written by Andy Narell, a prominent American steel pan musician and composer. The first piece was “Coffee Street,” a specially made piece for the Trinidadian Carnival Panorama celebration. The second piece was a soloist feature entitled “The Long Way Back,” drawing from jazz harmony and Brazilian grooves to highlight the vibraphone and the double second pan.
After “The Long Way Back,” the band performed a Stevie Wonder medley arranged by their double guitar pannist and saxophonist, Nicholas Bartell, the younger brother of co-founder Chad Bartell with vocal accompaniment by Alana Ross.
Panchromatic Steel concluded the concert with an instrumental steel pan rendition of “Friday I’m In Love” by The Cure. The band substituted the trademark late 90s heavy guitar presence with the light sounds of the steel pan drums, maintaining the naïve, happy nature of the song while introducing the cool, airy music of the Caribbean.
In total, Panchromatic Steel performed 8 pieces of music in a little over an hour. Though playing amidst a global pandemic and the bitter winter weather, the band gently transported the audience to the radiating warmth and comfort of the tropics with the beloved and trusty steel pan.
The schedule of the Performing Arts Series may be viewed at www.uwplatt.edu/pas. In order to purchase tickets, call (608) 342-1298 or visit www.uwplatt.edu/department/box-office. Tickets may also be purchased at the University Box Office, located in the lower level of Ullsvik Hall.