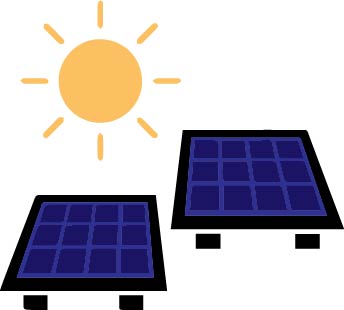 In Feb. 2021, UW-Platteville received state approval to construct a 2.4-megawatt solar array in Memorial Park. It will be the largest solar array owned by a Wisconsin state agency and one of the largest behind-the-meter solar arrays among higher education institutions in the nation.
According to Amy Seeboth-Wilson from the university’s Office of Sustainability, UW-Platteville is a leader in Wisconsin among government state agencies. The campus’s solar array will be 50 times larger than the current largest solar array at UW-Oshkosh, which is only about 40 kw.
The solar array will feed directly into 32 main campus buildings behind the electricity meter. It will offset campus’s electricity by 17%, making UW-Platteville the sixth-highest on-sit renewable energy producer among U.S. colleges and universities.
All electricity will be used in real-time, saving the campus approximately $217,000 and reducing campus CO2 emissions by 2,300 metric tons.
The array will be located on five acres of the south-facing slope west of Pickard Hall in Memorial Park. This location was selected because it is the most affordable and requires the least amount of tree removal.
“Not only will this project make UW-Platteville a leader in renewable energy adoption, but it will also help plant the seeds for continued progress on- and off-campus,” said Director of the 100% Renewable Campaign with Environment America Emma Searson.
The developer for this project was selected in Sept. 2020. The design was completed in Nov. 2020, and the contract was signed in Feb. 2021. Construction will begin in spring 2021, and the array will be fully operational by fall 2021.
“We can begin doing work as soon as the ground allows it,” said Seeboth-Wilson.
This project was selected to receive a state bond: the State Energy Conservation Bond. The university will use the money saved on electricity to pay for the project. Because the state bond has a low-interest rate, this is a sound plan.
According to Seeboth-Wilson, the solar array should, conservatively, take fifteen years to pay off with simple payback. After that, it will possibly save the university a quarter of a million dollars a year based on industry standards, though policy will impact this estimate.
“We’re going to pay for it with the money we’re not spending on our electricity bill,” Seeboth-Wilson said.
This project supports hands-on learning across campus. Dairy Science students developed a sheep grazing plan for the array. Reclamation, Environment and Conservation is providing insight on native flora and Stustainable and Renewable Energy Systems helped design the array, and Computer Science is designing a data dashboard that will share energy production information.
Seeboth-Wilson stressed that UW-Platteville students did the math on this project. They studied it first in renewable energy, then campus hired an independent contractor who got the same numbers as the SRES students. Finally, campus hired another independent contractor who came up with basically the same recommendations.
“This project has been studied by three independent groups and has been shown to be of great financial and institutional value,” said Seeboth-Wilson.
Most solar projects are distributed, meaning they connect to the local utility grid and the electricity flows to every building on the grid. However, UW-Platteville’s solar array will connect directly to campus buildings for use. This way the grid is avoided, reducing costs associated with transmissions.
“They [UW-Platteville students] will be able to see the beginning to the end of the conversation,” Seeboth-Wilson said.
Seeboth-Wilson explained that solar arrays are very non-invasive projects. There is no concrete poured and the topsoil is left largely undisturbed.
Seeboth-Wilson also shared that the solar array should last for about 30 years. After that, if the university would like to take it out, the habitat will have adjusted, and there won’t be any major damage or change to the land.
UW-Platteville Dairy Science students have developed a plan to host a sheep herd beneath the solar array. They are looking to get the herd by Summer of 2023. Seeboth-Wilson explained that the herd will control the grass so that the university won’t have to mow it. She also described how, historically, the Great Plains would be inhabited by herds of grazing animals. This sheep herd will function as part of the normal ecological system, working to restore the land to its natural form as an oak savannah, or a semi-shaded area with prairies beneath.
She further explained that solar creates good insulation jobs. She described Southwest Wisconsin as part of a “renewable energy boom,” with several solar fields already set up north of town and the largest solar array west of the Mississippi going in this year.
“Now our energy is in our backyard; we are literally growing it,” said Seeboth-Wilson.
Seeboth-Wilson is excited to have UW-Platteville students working with the solar array, and believes their exposure to this project will give them a leg up in their careers.