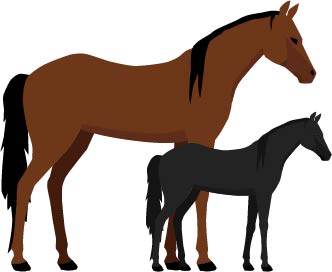 There are many different types of clubs and teams on campus, but did you know that there is an equine team? This team involves two different types of riding called English and Western. While the English team involves jumping and equitation, the Western team involves horsemanship and reining.
Horsemanship and equitation are both pretty similar; they just use different saddles. Western has a horn on the saddle, while English does not.
Although it’s all essentially the same concept, the rider wants to move the horse in the pattern that was given to them. A pattern is basically a list of maneuvers that the judge gives the rider on the day of the show.
There are different levels for each type of rider and there are even levels that cater to competitors who have never ridden a horse before.
The current equine team has 15 members, all from different levels.
“We first started off small with only six members. Not many knew about the team or what it really involved. Today we have 15 members—we have really been able to grow a lot more. Especially with the help from social media and being able to explain more about the team,” said Team Captain Maya Kramer.
The UW-Platteville team travels just about everywhere, from Missouri to Illinois, competing against all other division-three (D3) schools involved in the Intercollegiate Horse Association (IHSA). The IHSA is one of the associations for college equestrian teams to show through.
UW-Platteville chose to show through IHSA because this association does not require the rider to have their own horse. The fun part about going to a show is that the rider gets to draw a number out of a bucket or a hat to see which horse they get to show for that day. This means the riders get more experience by riding different types of horses.
The team practices at J&J Stables, which is located on State Road 81. It’s about a five-minute drive from campus. Many of the horses that are used in practice are often donated horses owned either by students or some of the people who board their horses on the property.