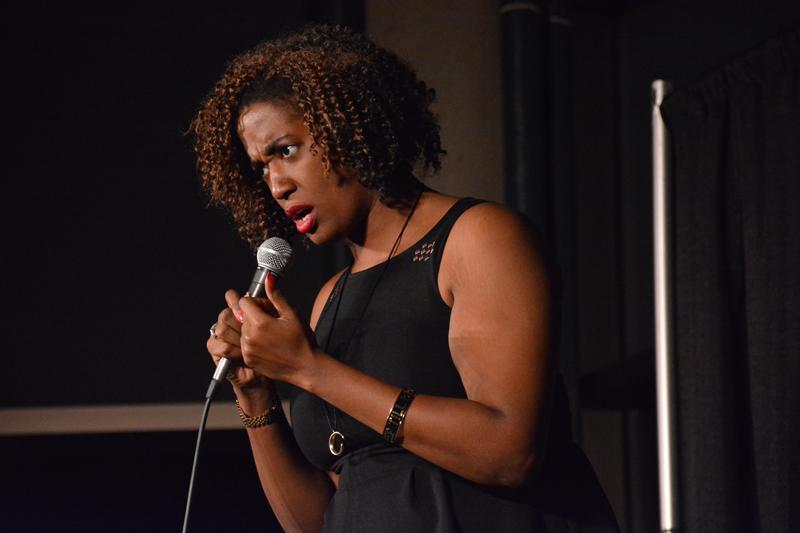 Approximately 200 people, ranging from students to adults, gathered at the Crossing in the Markee Pioneer Student Center on this past Saturday night to see comedians Chloé Hilliard and Roy Woods Jr. perform at Stand-Up Saturday.

Students never seemed to stop laughing at the jokes these two comedians shared. Both Hilliard and Woods did a great job at connecting with the audience.

“People think college students can’t relate to my material, but they have jobs, debt and life experiences just like anyone else. They can relate,” Hilliard said.

Hilliard, who took the stage first, grew up in Brooklyn, New York and was raised in a large Hasidic, Jewish neighborhood. Hillard used her unique life experiences to create a comic routine. Hilliard started out as a journalist, but with her quick wit and humor, she had made a career in comedy.  She has written for The Village Voice and The Source and was a managing editor and social media manager for VIBE.  Her work has been featured in Best African American Essays: 2009, and she has also been on NBC’s “Last Comic Standing.”

“Platteville is a great campus. Everyone has been very nice to me here. I come from a big city and there is just something about small towns,” Hilliard said.

Woods is from Birmingham, Ala. He started his comic career at Florida A & M University in 1999. Woods is known for his prank calls and work on talk radio. He has appeared on “The Late Show with David Letterman,” “The Late Show with Craig Ferguson,” and has released three prank call CDs, “My Momma Made Me Wear This,” “Confessions of a Bench Warmer” and “I’ll Slap You to Sleep.” Woods was chosen by America as one of the top three finalists on “The Last Comic Standing” and has appeared on “Conan” multiple times. Currently, Woods has landed a recurring role on the TBS sitcom “Sullivan and Sons.”

With jokes ranging from why girls really get dressed up to  go out and how to get banned from Wal-Mart, there was not a silent moment throughout the entire two-hour show.

“The show was full of laughs. Both comedians found a way to bring laughter to every day college experiences and situations. Both were very relatable, and I enjoyed listening to them,” Nikki Winohradsky, senior elementary education major said.

“I like to make my material relatable to my audience,” Woods said.