‘The Sisterhood of the Traveling’ Campaign 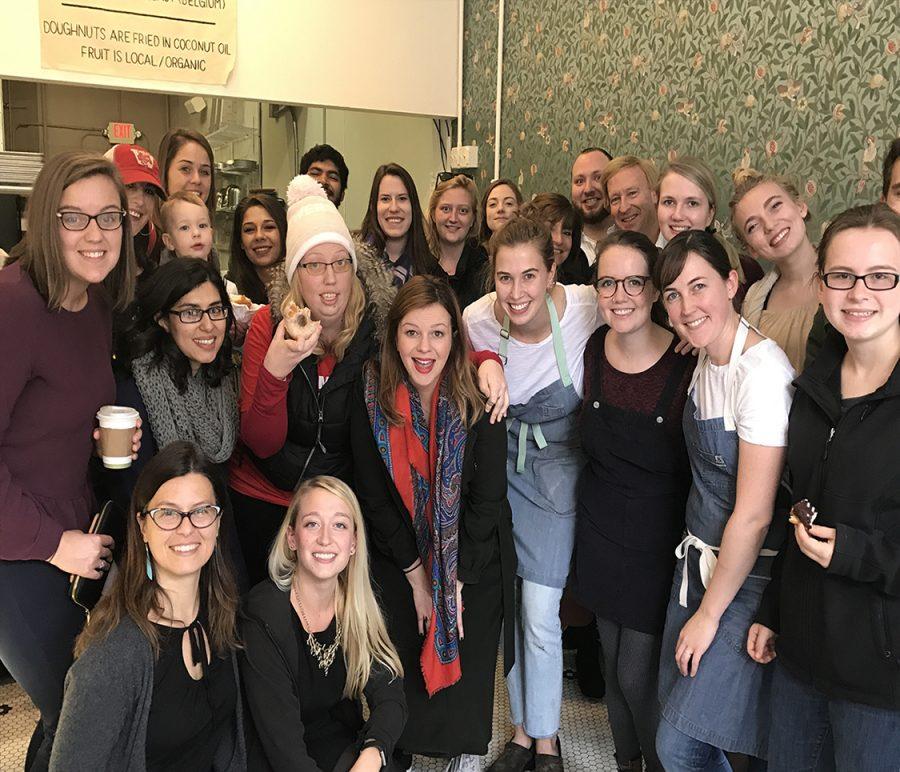 Actress Amber Tamblyn visited a local bakery in Madison where she talked to a large crowd about the importance of voting in Wisconsin.

Actress Amber Tamblyn has appeared in numerous films and television shows, namely The Sisterhood of the Traveling Pants films, The Ring, TV’s House and Two and a Half Men. Tamblyn has recently been on the news cycle for her editorial articles about the current presidential election and her experiences with sexual assault.

On Oct. 25, Tamblyn was in Madison to talk about the Hillary Clinton campaign. The venue chosen for Tamblyn’s appearance was a local Madison women owned bakery called Dough Baby Bakery.

“[We were asked] a couple months ago if we were interested in hosting an event and we said we were,” Dough Baby Bakery owner Kristine Miller said.

Before the event started, there was a small crowd anxiously waiting for the actress.

“Do you remember her from The Sisterhood of the Traveling Pants?” one female attendee said to another female attendee, as they eagerly awaited Tamblyn’s appearance.

The fans of Tamblyn, who grew up watching her films, were excited to hear her talk about Clinton.

“I try not to think of a ‘celebrity status’ and more of a relationship. Especially with young women, how we’re all sort of forming our minds as we get older. We’re growing up together and they grew up with my movies, I grew up with them. I sort of encourage and hope that if someone is as passionate as I am about something like this, that they see that this is not just this one election cycle. Every four years, every two years I care! And it matters to me, so I’m hoping that that will also influence them,” Tamblyn said.

The whole bakery was murmuring in anticipation for Tamblyn. When she arrived, Tamblyn thanked the people that were able to make it and thanked the organizers who planned the entire event.

Tamblyn started off the event with a little backstory about her relationship with Clinton.  How she and fellow Sisterhood of the Traveling Pants co-star, America Ferrera, co-ran Clinton’s Youth Outreach program and how it’s really a crucial time to vote.

“It’s a crucial time [to vote] because it’s a historic time. Much in the way that 2008 was also a historic time, you know? We’re changing the way in which we see people in positions of power by bringing women, by bringing in people of color and that’s really important. It sends messages to my generation, to younger generations that coming up beneath me, it tells my friend’s little sister that they someday can be a president. That that is not too big of a deal.  And I think as far as the national psychology, that it’s so important for us to grow as a country by not only electing somebody who is a woman for the first time ever in our history, but somebody who is so beautifully qualified for to take on that job,” Tamblyn said.

She went on to say that picking a presidential candidate isn’t enough. That we, as voters, have to elect officials that we believe will improve the country. That most of Obama’s vision wasn’t able to be seen because many officials shot his ideas down.

“I think it’s important for young adults to vote because we are an incredibly privileged country to be able to do that, it’s something that a lot of countries don’t get to do. It’s your voice heard on such huge level and knowing that you can, in fact, impact the state of your country,” Tamblyn said. “I think when people say that there’s not a candidate for them, I think that’s a place of extreme privilege to say that. I understand that there’s a lot of concerns about Hillary. I respect that, I get it. Her voting record isn’t perfect, but guess what? Nobody’s is,” Tamblyn said. “I really, really truly believe in realism over ideology. If we’re looking at this, you’re looking at someone who has done incredible things for the country and in her time in public office. So when I look at that, I just see a very very clear choice.  To me, that’s Hillary.  So, I hope that they can let go of some of the mythology surrounding her and a lot of the exaggerated lies that have been spread over the years. I totally respect the fact that there are aspects of her that people don’t like. But if you look at the big picture and you look at her wholly as a human being and also a politician, you’ll see that she’s pretty damn perfect for this job.  And she’ll do a really really good job carrying Obama’s legacy, which is all that anyone can hope for.  That, combined with the fact that so much of her platform is very literally incorporated with Bernie Sander’s voice. The worked together to put a lot of initiatives together for her campaign and for the election. I don’t know what else you can ask for but that. I mean, they’ll be getting the best of both worlds.”

ambled later explained how important this election truly is.  How electing a woman for the presidency for the first time in United States history is a huge stride towards gender equality and how people over exaggerate the voting process.

“Well one of the things that I’ve always stressed, and I would stress to your readers, is that it’s not as hard as it sounds. I feel like people get registered to vote and when election day comes they go ‘oh God, this is going to be like some God awful math test!’ It really isn’t. I don’t have to be hard. If you got to ballotpedia.com, it will show you, and apparently you guys one have here in Wisconsin one measure on the ballot. That’s going to make it so easy! So you’re going to go in and make that choice and you’re also going to make state official c choices, and then you’re going to make your choice based on the president that you want. It shouldn’t take you more than five minutes to vote. So I encourage people to think that it’s such a quick thing. It’s not like a long test you have to study for. And it does matter. It matters in places like Wisconsin, it matters in places- yesterday I was in Iowa. I’m from California, which is such a giant state. I can maybe say that my one vote may not count as much. It’s still awesome I get to do it. But listen to me when I say that in Wisconsin, every single vote counts. It can change something drastically. And your readers get to be a part of that, if they participate,” Tamblyn said.

After her speech, the bakery gave out donuts to everyone that attended. Tamblyn herself talked to everyone at the event and took some pictures with them.

Encouraging people to vote was just one aspect of her visit. The overall reason for her visit was to promote the Clinton campaign and to talk about her and her policies. So the question is, why is Tamblyn with her?

Voting for the presidential election is Nov. 8. On campus residents can vote on campus in Ullsvik Hall.