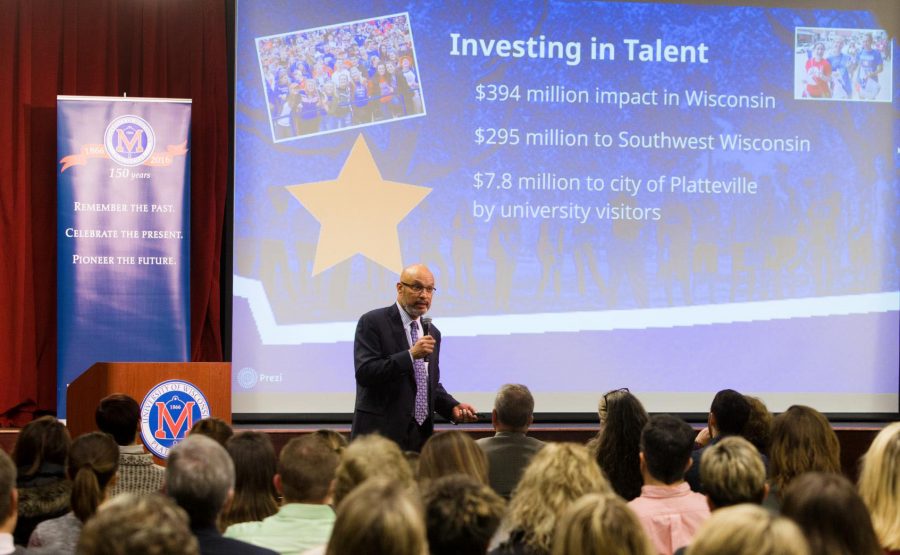 Chancellor Dennis Shields delivers State of the University address on Jan. 30; four days before he interviewed at Wright State University

On Feb. 1 the Dayton Business Journal broke news that Chancellor Dennis Shields was one of three finalists interviewing for the president position at Wright State University.  Shields visited the Ohio campus on Feb. 2-4 where he met with students, faculty and members of the community.

“Universities are successful because of the collective intellectual energy of the place and I’d like to think that I’m the kind of person that can facilitate that,” Shields said in a YouTube video posted on the Wright State University website.  Wright State is currently facing several budget cuts and during his time at the University of Wisconsin-Platteville, Shields has had to figure out ways to accommodate these severe budget cuts orchestrated by Governor Scott Walker.  In his cover letter Shields claims that reducing and eliminating under enrolled academic programs, such as the media studies major, and increasing in and out of state enrollment are ways that he has helped UW-Platteville’s financial situation.

In the same letter, Shields said that he has a proven ability of building administration and leading schools such as UW-Platteville and the City College of New York.  He also claimed that he was able to increase the diversity enrollment at UW-Platteville from three percent to nine percent.

This is not the first time that Shields has been interviewed for a presidency position at a different university.  As reported in the Sept. 24, 2015 issue of the Exponent, Shields was interviewed by Chicago State University.  Ultimately CSU decided against Shields at the time.

“Right now I’m fully focused on the work of leading this university,” Shields said in an email interview with the Exponent.

Wright State’s other potential candidates are Chancellor Deborah Ford from UW-Parkside and Chancellor Cheryl Schrader from Missouri University of Science and Technology.

“Don’t have anything to add at this point. Their process is ongoing,” Shields said in an email interview.