Platteville reacts to the end of DACA 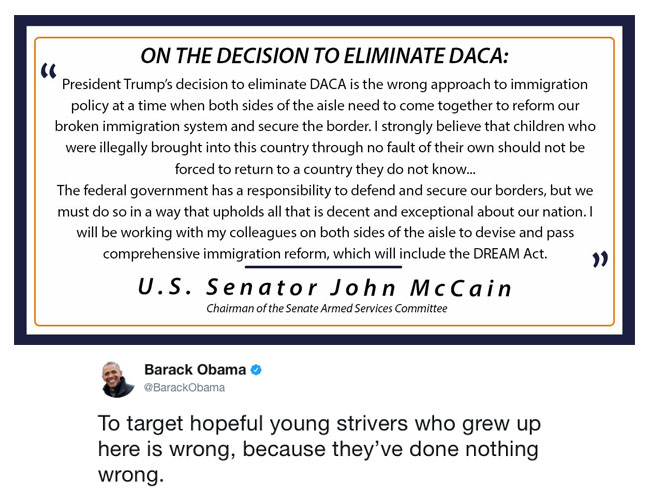 Former president Barack Obama and senator John McCain express their views about the ending of DACA.

On Sept. 5, President Donald Trump announced his decision to end the Deferred Action for Childhood Arrivals (DACA), a program that protects people who arrived to the United States illegally as minors from deportation and allows them to become eligible for a work permit.  DACA was first put into effect by the Obama administration in 2012. In the last five years, a reported 800,000 individuals across the country are covered by DACA, including people that attend the University of Wisconsin-Platteville.

Following the President’s announcement, Chancellor Dennis Shields addressed the situation by sending out a campus-wide email offering his support to the Dreamers who have been affected. According to CNN, the undocumented children covered by DACA are referred to as Dreamers.

“The University of Wisconsin-Platteville pledges support to our students who may be impacted by this situation. We value every member of our campus community and take seriously our responsibility to foster an inclusive campus for all, with respect and appreciation of each individual,” Chancellor Shields’ email read.

It is currently unknown how many Dreamers are at UW-Platteville because their immigration status is protected by the Family Educational Rights and Privacy Act (FERPA) and they do not require them to self-report.  The university also does not collect the immigration status of their applicants.

“Nationwide, thousands of college students will be affected by the Trump administration’s decision to end DACA,” director of international programs Donna Anderson said in an email interview. “These students and their communities will be and already are negatively impacted by the decision to end DACA.  These students are scared about their future and the future of their families, and stressed about how they will financially survive, let alone complete a college degree, if they are unable to work.” Anderson explained that DACA students pay their tuition in full since they are unable to receive state and federal financial aid.

The ending of DACA is impacting UW-Platteville students because of the stress that it can cause.  Assistant director of the Office of Multicultural Student Affairs Kari Hill said that any time someone from our community is impacted negatively, it affects the campus as a whole.

“Many students may have family or friends that are impacted by this and are under a great deal of stress and worry for others as well,” Hill said.

Senior political science major Tomy Xiong saw the impact that it has brought some of his peers and took to his social media accounts urging his contacts to call their senators and vote against President Trump’s decision, believing that regardless of our racial background, our ancestors were once immigrants.

“I felt angered about it because it would end up affecting a lot of people around me. Later that night, I tried thinking of how I could help inform others about it and would end up posting it on social media,” Xiong said.  “I decided to post it up on social media because I figured that within my generation and the future generations, we are less likely to outreach to the political world on info unless it affects us. By posting what I did on social media, I knew those who looked at my feed but never responded towards them, would respond because it would somehow either affect them or those around them.”

In this trying time, Chancellor Shields and the International Programs Office urge students who are affected to reach out to the Office of Multicultural Student Affairs, Counseling Services and report any bias incident to https://uwplatt.edu/diversity/bias-incident-reporting.

“I think the most important things are to be informed and to be supportive,” Hill said when asked how the campus can ensure the safety of international and local students.  “Read up to learn about what DACA is and what it isn’t; don’t stereotype and assume you know who is a DACA student. Know that DACA students do have rights; know that this is life changing for these students and their families, and show compassion.”