Pioneers react to the NFL’s ‘Take a Knee’ protest 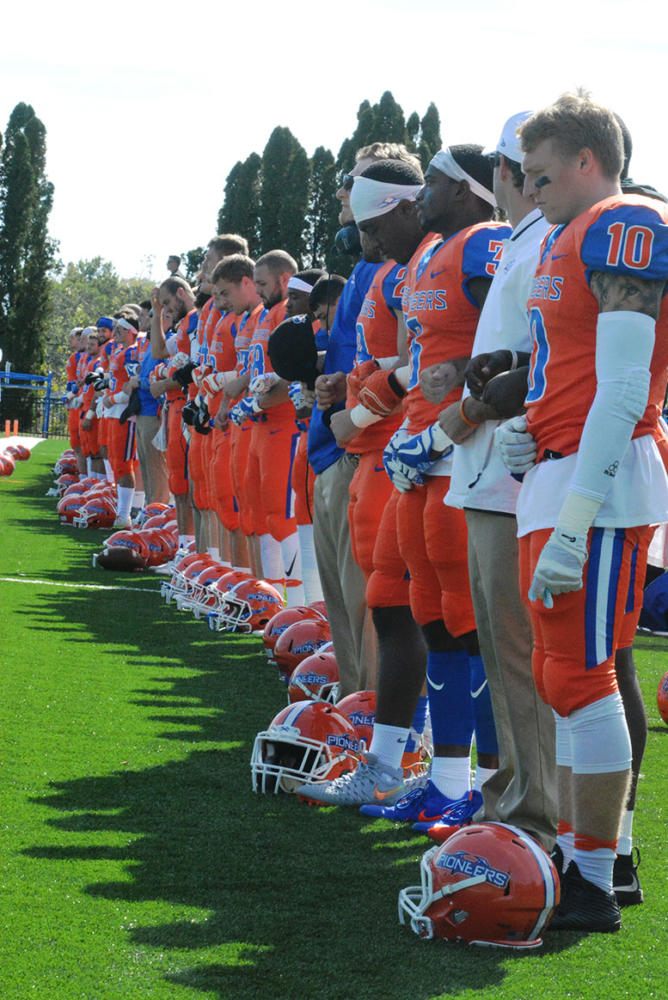 The University of Wisconsin-Platteville football team stands together with locked arms during the national anthem.

On Sept. 23, President Donald Trump spoke at a political rally in Alabama where he addressed the football players kneeling during the national anthem. Trump targeted players like Colin Kaepernick and Malcolm Jenkins, by referring to them as “sons of bitches” and urged the owners of National Football League teams to fire anyone that doesn’t stand. Kaepernick started kneeling during the national anthem back in 2016 to peacefully protest the racial injustice and police brutality that has been happening in America.

After the rally, Trump took to social media, urging people to boycott the NFL in a series of tweets. The following day, teams such as the Philadelphia Eagles, Jacksonville Jaguars, Denver Broncos and the Dallas Cowboys all had players kneeling or locking arms during the national anthem to show solidarity with their team and the NFL.

“Football is such a huge platform in this country. People plan their Sundays around football. We eat, we sleep football,” Wright Center for Veterans and Non-traditional Students coordinator Doug Nimke said. “When the players that we hold up are breaking from the norm, and that norm is standing in a line and doing the ‘respectful’ thing so to think, and I think that when people do that it takes people aback.”

The “Take a Knee” protest sparked a conversation across the country of whether or not these players are disrespecting the flag and the veterans who have fought for it. For a veteran like Nimke, he realizes how emotional the subject can be for some and how others can be okay with someone kneeling before the flag.

“I think the important thing to know about veterans is that they all committed themselves to serving the constitution of the United States, and at the end of the day that oath to the constitution is one of the greatest things a veteran can do,” Nimke said. “A great thing about this country is that we can do that [protest]. Our flag and our constitution is strong enough that we can endure.”

However, the University of Wisconsin-Platteville football team decided together to not kneel during the anthem. Head football coach Mike Emendorfer said that the team has had discussions over the protests and that unity is the most important part to them.

“I understand completely why people kneel because they believe not everyone in this country is respected equally, especially in the black community. This country is a melting pot of different cultures and races, and that’s what makes us so amazing. I never want any injustice for certain communities, but I just personally wish they would keep it out of the sporting environment. This past Saturday our very own UWP football team decided to stand but cross arms because we are a family and [we] have each other’s backs- no matter your political view. We did this because you’re never going to have everyone on a team of 100 plus players agree politically and same goes with teams across the country,” senior linebacker Colin Griffin said.

Freshman running back Reggie Terrell agreed with Griffin in wishing that politics would stay out of sports. Terrell believes that the protest is being blown out of proportion and that the players have a right to do as they please.

“Everyone is going to have an opinion. Let’s not worry about whether they’re being disrespectful to the flag but worry about the issue that they’re bringing attention to and let’s keep our attention on that because ultimately if we fix that then we will have a country that our people will want to stand for,” Nimke said.