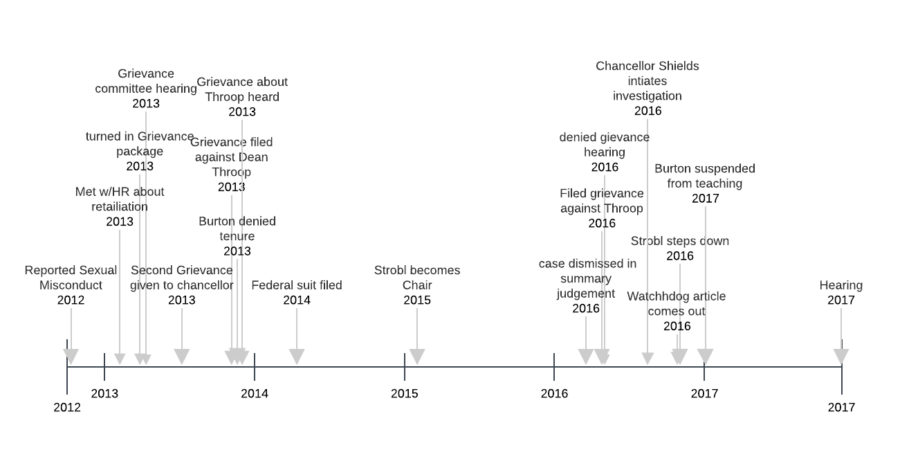 “Use your voice, please.  Stand up for the law,” Robert Kasieta said to a faculty panel regarding tenured faculty member Sabina Burton’s termination.  Burton received a letter on March 30, 2017 stating that Chancellor Dennis Shields has recommended to the University of Wisconsin System Board of Regents that Burton should be terminated.

On Nov. 30, the University of Wisconsin-Platteville hosted the final faculty committee hearing, paneled by Susan Hansen, Abulkhair Massoon, Barbara Barnet, Sheryl Wills and Richard Bockhop, to decide whether or not they take Chancellor Shields’ recommendation to terminate Burton. Wisconsin is considered a tenure review state, meaning that the tenured faculty are required to be evaluated occasionally.

At the start of the hearing, Kasieta and Burton requested a recess because of lack of advertisement of the session and a need to review an email that was brought into question, which Chancellor Shields and his lawyer Jennifer Sloan Lattis objected to.

“What is the harm of continuing?” Hansen asked and the session proceeded as planned.

Burton has been labeled as a “whistle blower” by the university since 2012 when she reported a sexual misconduct allegation against former professor Lorne Gibson. As previously reported by the Exponent, Gibson allegedly wrote his phone number on a sheet of paper and gave it to a student asking her to call him.  Throughout the last five years, Burton claims she was bullied, threatened and harassed by the criminal justice department because of what she reported.  During this time, Burton claimed that she brought up problems within the department, only to be told that she was acting as an unprofessional colleague.

Chancellor Shields claimed that the criminal justice department has been attempting to fix those problems by inserting an interim chair, and then hiring a new chair of the department.

“It was at that point in the conversation, I remember it because Provost Den Herder came in to have a conversation with me about what transpired.  And it ended up with him [Caywood] departing from the department,” Chancellor Shields said. “What doesn’t happen is a colleague violates the trust of her peers, colleagues, and university by publishing what should be confidential and valued information about their peers.”

The university has argued that Burton has been untrustworthy to her colleagues because she has allegedly recorded conversations without the other party’s consent.  Chancellor Shields and his attorney claimed that it has created a threatening work environment.  According to Lattis, Burton is not committing any felony because Wisconsin is a one-party consent state.

“The question for you and your recommendations is whether you think has transpired rises to level of violation of trust and orderly evaluation of faculty which is essential core of your jobs as faculty, rises to the level where this crosses the line warranting her termination from this faculty,” Chancellor Shields said. “I just wanted to bring that up to you from my perspective.”

After Kasieta finished, Lattis argued that Burton is an unprofessional employee at UW-Platteville.  She pointed to incidents of Burton recording conversations, building a public website that provides private information in regards to colleagues, sending “threatening” emails within the department and telling her story to a news reporter who has made a series of it on two different Wisconsin news-based websites.

“She has violated important norms of not releasing confidential information about the performance of colleagues.  And she has done it repeatedly.  And she tries to get out of it by saying “well that wasn’t me that was my husband” but who reported those meetings? Who provided that information? Who edited, you know, who edited transcripts and potentially misrepresent her. Who always motivates her? It was Dr. Burton,” Lattis said.

The faculty committee is deliberating on Dec. 4 and reconvening on Dec. 5.  The Exponent will continue to report on this as it progresses.