Students, faculty and community gather together to fight cancer. 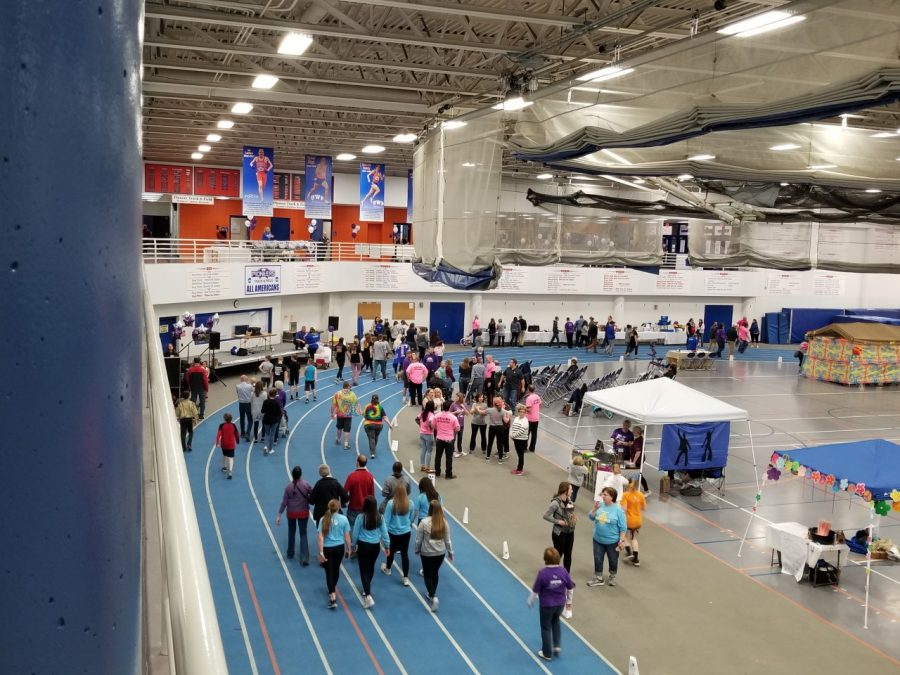 The University of Wisconsin-Platteville hosted the annual Grant Count Relay for Life this past Friday in the Pioneer Activity Center. The event was put on by the American Cancer Society in order to raise money for cancer research. Multiple campus and city organizations set up stations on the interior of the track. These organizations included Greek life chapters, local clubs and teams named after survivors and those who lost their lives to cancer. Surrounding the stations were representatives from each group walking around the track alongside the family and friends of those who have lost a loved one to cancer and those still fighting.

“[The event was] very fun; lots of awesome groups came out to support and have fun activities and the pep band was rockin’,” junior elementary and STEM education major Danielle Dillon said.

Relay for Life showcased many fun activities for people to participate in. A silent auction sold off items, such as a signed Green Bay Packers football, candy baskets and movie tickets. There was also a costume contest where individuals and teams dressed as cowboys, Disney characters and hippies. Some of the Greek chapters and campus groups held cornhole tournaments, played spike ball and handed out bead necklaces that those walking on the track could slowly build a bead at a time when they completed one lap around the track.

“I think it’s really cool that so many people can come together to support a common cause like this and its really cool to think about all the money that gets donated to research cancer,” sophomore mechanical engineering major Trisha Yarwood said.

Each group member that participated in a team for Relay for Life was required to donate a minimum of $10 on their website. This created an initial pool of donation money from the over 300 people who attended. Greek chapters, like Tau Kappa Epsilon, raised over $1,700. Other Greeks like, Gamma Phi Beta and Sigma Pi, raised money in the hundreds of dollars.

“I thought it was great to see so many people together for the same reason, and such an important one at that. Everyone here has been touched by cancer no matter if its just a family member; everyone has been touched by this, so it needs awareness,” sophomore mechanical engineering major Josh Nelson said.

Towards the end of the event, there was the luminaria, an event in which white lunch bags were lined along the inside of the track. Each bag had designs, pictures and names of those who have passed away from cancer and those who are still struggling with it. Each bag had a light-up candle inside that was lit when the lights of the fieldhouse were dimmed. The announcer then read off the names of those represented on each bag. With some teary eyes, members of all the groups attending then proceeded to walk on the track together, some holding hands with the families and friends suffering as a way to show solidarity in the fight against cancer.