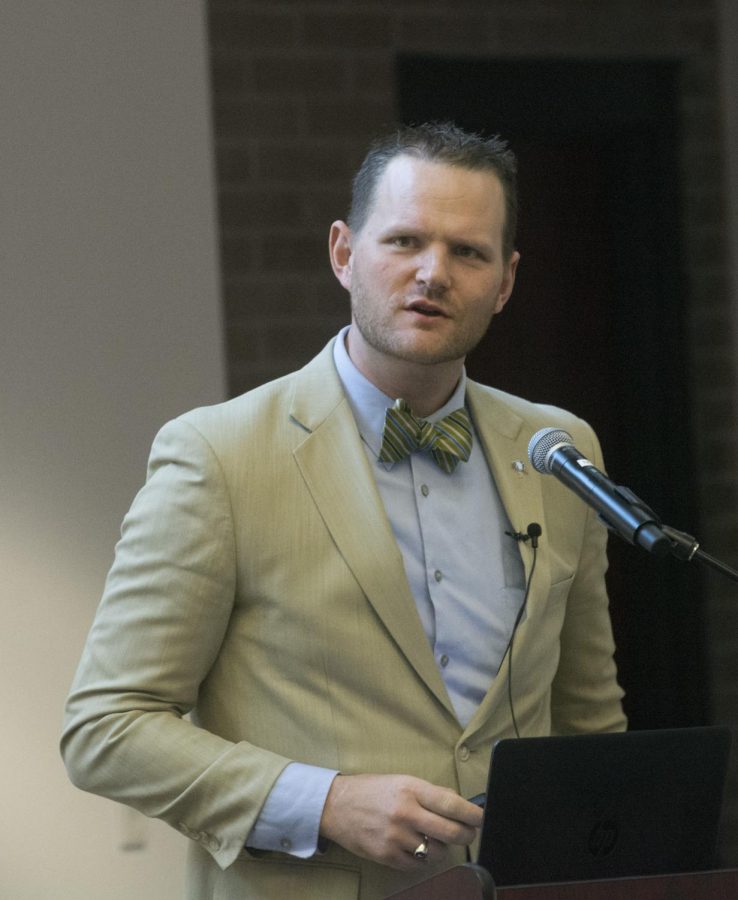 Jacob Thomas photo Dr. Eugene Tesdahl delving into his research on smuggling stroud, wampum and beaver fur between New York and New France in the 1700s.

The University of Wisconsin-Platteville hosted a Platteville Pioneer Talk in which three professors presented their research results in their fields.

Dr. Eugene Tesdahl, assistant professor of history at UW-Platteville, presented on smuggling in the Eighteenth-Century Atlantic World. He introduced an area of the Atlantic Midwest called “the Driftless Region”, focusing specifically on the smuggling within the region between New York and New France (Quebec). Tesdahl pointed out that trade remains trade unless there are states to label it illicit or illegal, in which case it becomes smuggling.

This last summer, Tesdahl visited multiple archives in England and France to try to decipher documents that many smugglers tried to hide and burn from the 1720s to the 1750s.

“What is smuggling?” he asked the audience. The generally agreed upon response was, “the illegal transport of drugs, alcohol in the 20s and [fire]arms. However, that was not what Tesdahl had in mind.

Smuggling between New York State and mainly New France consisted mostly of stroud, wampum and beaver fur. Tesdahl shared that he had found the same few names/characters popping up consistently throughout the documents he studied; Lydius, Dagneau and the Desauniers.

The French and British had laws placed on their colonies making it illegal for them to trade with other foreign colonies. Instead, they were supposed to ship everything back to the mainland first. This made trading straight from New York to Montreal illegal.

The Haudenoshoneh, a native confederacy of tribes, often participated in smuggling without realizing it, because they didn’t recognize the barriers and boundaries of the colonies. They didn’t even have a word for “boundaries” in their language, so they would smuggle under the misunderstanding that it was trade.

Dr. Hiro Kobayashi, assistant professor in the department of engineering at UW-Platteville, shared his research on muscle action-potential source localization by Independent Component Analysis. Muscle assessment research has been done before, but there are still no devices to help doctors diagnose muscular diseases such as muscular dystrophy.

Kobayashi’s research was focused around coming up with an algorythm to identify activity in the muscles in a similar way to how doctors measure the neuroactivity in the brain. In this way, doctors could actually diagnose muscular diseases and try to understand them better. Kobayashi has made progress in his project, and he continues to pursue optimal results.

Dr. Ryan J. Haasl, associate professor in the epartment of biology at UW-Platteville, presented his research on biological morphospace.

He shared that evolutionary biologists have two main problems with the famous depiction of man coming from ape, “The March of Progress.” Firstly, he said that the progression makes it seem like perfection is attainable through evolution, which is not true. Secondly, it makes evolution seem like a linear process, which it is not.

Haasl described evolution as more of a branching process; we come from many ancestors. This led him to introduce the terms “microevolution” and “macroevolution.” An example of macroevolution is cephalopods that moved from having hard outer shells to hardly having a shell at all. This could possibly have been and adaptive development. An example of microevolution is humans adapting to break down lactose in adulthood, or having blue eyes; are these changes adaptive or nonadoptive? One could probably argue either way.

Haasl introduced Giambattista Brochi’s analogy which equates the “life” of a species with the life of an individual organism. Once an organism reaches its “peak form”, it reaches a kind of evolutionary stasis.

This led Haasl to simulate box organisms, allowing them to change over time. He and his research team allowed the box organisms to simulate the genetics that allow organism to change, which has never been done before. They measured the morphospace, or the space that the box creature could potentially take up, every step of the way.

As for restults, Haasl and his team concluded that cladogenetic change seems to dominate and there were minimal anagenetic change. His research is the first to directly model underlying genetic variation in study of phenotypic change at a macro-level and support the punctuated equilibria hypothesis.