Students, staff and community gather to honor and remember her story 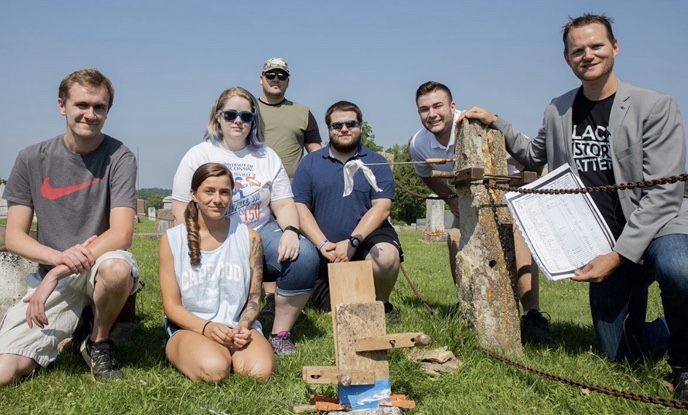 On Friday, a group of students, staff and community from as far as Madison gathered at the corner of the Rountree plot in Hillside Cemetery to celebrate the rededication of a small gravestone, belonging to a woman named Rachel. This illegally enslaved woman was brought to southwest Wisconsin by the founding father of Platteville, John H. Rountree, somewhere around the year 1828. Here, she worked as a slave for the Rountree family until 1841.

After Rountree freed her, Rachel remained in the household until her death around 1854.

“One thing I think was great about today with this ceremony, is that we had community members from Platteville, the University of Wisconsin-Platteville and from as far away as Madison and Dubuque. People came to celebrate Rachel and her memory, and I think that is part of the hope that can take us forward,” assistant professor of history Dr. Eugene Tesdahl said.

Gus Barnes Junior, a pastor at Luther Memorial Church, ELCA in Delavan, was honored to contribute to the rededication service by leading a ceremony to honor Rachel and to baptize her grave.

“I feel very inspired because of the crowd. Back in the time when she might have passed, probably no one was at her funeral, or at least very few. Fast-forward to today’s date and there were at least fifty people here to remember, renew and rejoice about the life of this person,” Barnes said.

Pastor Barnes shared a few passages with the crowd that he found to be very fitting to the ceremony. He then baptized her grave, as well as the crowd, with Holy Water and a sprig of evergreen.

“I think that this is a start. I hope that, for years to come, students will return to remember this moment in time,” Barnes said.

Among the crowd was Brandon Snyder, who participated in the project of restoration and research into Rachel’s life with the Rountree Family.

“We completed the [restoration] project over the summer. During this summer course we focused on Native American dispossession and chattel slavery within the Driftless region. We started researching Rachel after the first week of class by looking at federal censuses,” Snyder said.

Also present were two alumnae, Winnie Redfearn and Simone Rand, who worked together on a project that lead to the rediscovery of Rachel and her story.

“We started with a research project on African American lead miners in Wisconsin, and we found that John H. Rountree, George W. Jones, Henry Dodge and a few others had illegally enslaved individuals in Wisconsin,” Winnie Redfearn said.

They stressed the importance of recognizing that slavery happened in Wisconsin, too. Midwesterners often have no idea how far north slavery extended, even though it was illegal due to the Northwest Ordinance of 1787.

“We were originally digging to find out what they [enslaved miners] did on a day-to-day basis, but we ended up finding out that they were tricked to come up here with the promise of release in six months. However, they weren’t released for over six to eight years, sometimes even 11 or 12,” Simone Rand said.

Professor Tesdahl, the advisor for the project of the grave’s restoration, shared that he thinks it is really important to remember not only the people of the past, but the uncomfortable, sad or ugly lessons of the American past. Rachel is an important reminder that the north is not as innocent as we are often led to believe.

“I think it’s hard to say if Rachel has an opinion about what we did this morning, but I feel more at peace; the event this morning has given me closure. I will still research Rachel, but it was a wonderful ceremony and I am glad it came together,” Tesdahl said.