Lack of representation and visability leads to active community protests 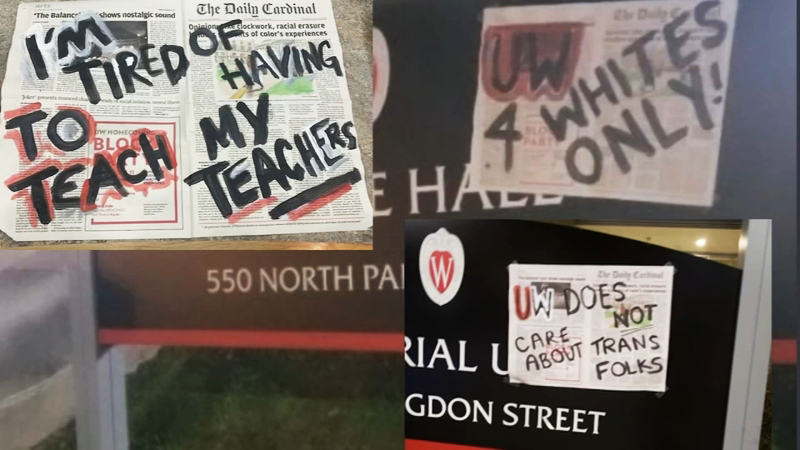 About a week ago, posts started popping up all over social media featuring a number of messages that had been plastered on building signs around the UW-Madison campus. At first, these messages – red and black paint used to write across issues of the student newspaper, “The Daily Cardinal” – appeared to be the work of a hate group, the three main messages being; “UW does not care about trans folks,” “I’m tired of having to teach my teachers” and “UW 4 whites only.”  However, upon further investigation, these messages were found to have been posted by underrepresented students who had just had enough.

UW-Madison serves as a face for the entire UW system; generally, a problem there, is a problem everywhere. UW-Madison initially took to Twitter on Friday morning to say: “UW stands against hate and racism. We’re aware that, last night, a racist message was posted on a building sign outside Science Hall. We are removing this message and any others and @UWMadisonPolice is investigating. We will provide more info later today.” This was before the intention of the posters was fully realized.

In a more recent update, the university acknowledged the posters as part of a larger, coordinated protest by underrepresented students. This being said, the university also makes it clear that “While we support the right to freedom of expression, we also have policies that prohibit the posting of unauthorized material on campus property. As with any incident like this, we are gathering more information and will be following up as appropriate.”

The question is this; why are students protesting? There is a disturbing lack of coverage on potential connections regarding events that could have potentially spurred students to express themselves so viscerally.

That being said, there is a clear precipitating cause for the “UW 4 whites only” poster: The UW-Madison Homecoming Video. This video caused controversy of its own for its utter lack of inclusion. The theme for the video was “Home is where WI are,” and it followed students swimming, biking, dancing etc. around Madison, giving a general tour of the town and the campus. The writers of the voice-over even made a point to say, “[UW-Madison] it’s welcoming everyone into our home.”  However, in the entirety of the 1:38 minute video, the viewer has to search very carefully to find even one person of color.

This is especially troubling, considering the fact that the Epsilon Delta chapter of the Black sorority, Alpha Kappa Sorority, Inc. was asked to participate in the video. The student-run UW-Madison Homecoming Committee shot footage with students from the sorority, inviting them to share what “home” meant to them at UW-Madison.

“Not only did we tell them what we thought home was, but we also took hours out of our day to film as well, and were told we would be in the video and notified when it was completed. As you can see, we were not featured in the video as we were told, but not only were we not featured, no Black students were featured…,” chapter member Payton Wade said via Facebook.

“They made a conscious decision to not have any people of color even though they had the footage to begin with,” senior architecture student Hayley Pendergast said.

The Homecoming Committee took the video down the following Monday and issued this apology: “Unfortunately, not all the video images produced were included in the final product, including those of students from underrepresented populations. We regret omitting those images and we recognized that, by doing so, we unintentionally caused hurt to members of our campus community.”

This situation is upsetting, but equally as frustrating is the utter lack of recognition regarding the other message: “UW does not care about trans folks.” It has become so easy for us, as a country, to recognize and divert all of our attention to the issue of a black and white divide. It has become almost sensationalized, which is demonstrated by the media coverage of the posters, which makes this protest seem like a solely black and white issue.

Every aspect of underrepresentation is a real and tangible problem, and deserves real and honest attention. The outcry of other underrepresented students cannot be left unaddressed as it has in this situation. We need to know why trans folks don’t feel accepted in the UW system, and what about other students of color? We need to hear every story with equal attention, and we need to reform.