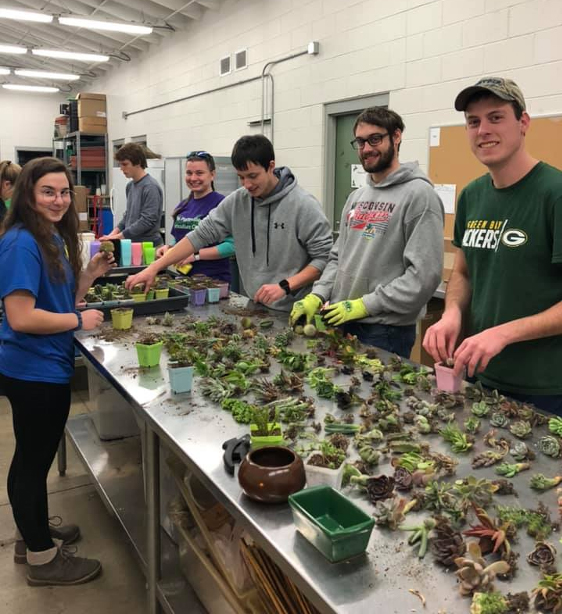 It may still be cold and gloomy outside, but the Horticulture Club on campus is already thinking spring! From March 2 to March 5, the Horticulture Club is selling succulents in the Markee Pioneer Student Center from 9 a.m. to 4 p.m. while supplies last.
Succulents are sold in a variety of containers for 5 dollars each. According to the club secretary and senior environmental horticulture major Cassandra Theisen, the money earned from the succulent sale will go towards funding the Horticulture Club’s many activities that they host throughout the year.
The group has already started working on another plant sale that they will be having later this spring. They will be selling a variety of garden plants out of the greenhouse next to the football stadium. All the plants sold have been grown and cared for by members of the Horticulture Club.
The Horticulture Club is always looking for new members to join.
“I like everyone in the club because they are all outgoing and have an interest in plants like me,” Theisen said.
The group participates at the National Collegiate Landscape Competition (NCLC) in March every year at Michigan State. Members have taken part in events such as Plant Identification, Plant Problems, Landscaping and Designs and even Skid Steer Operator.
“The competition is my all-time favorite part about being in Horticulture Club,” Theisen says.
Besides participating in competitions, the group teams up and plays volleyball occasionally with the Agronomy Club on campus. In the fall, they go to apple orchards as a group. The Horticulture Club participates in Ag Day on Campus and celebrates Earth Day.
Horticulture Club meets the first and third Wednesday of each month at 6 p.m. in the Greenhouse by the gardens. Anyone is welcome to join at any time. All you need to have is an interest or a passion for plants.
If you want to learn more about joining the Horticulture Club or want to see what they are up to, you can follow them on Facebook at Horticulture Club of UW-Platteville.