President Trump plans to nominate a female justice: Here’s his most likely pick 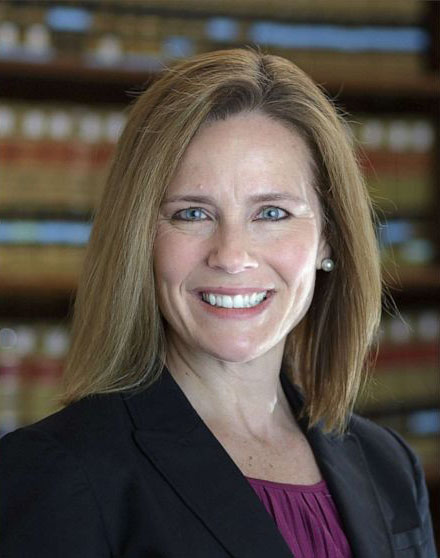 After 27 years serving on the U.S. Supreme Court, Justice Ruth Bader Ginsburg passed away on Sept. 18, 2020 at the age of 87.
With 42 days until the next election, Ginsburg’s passing has left a lot of Americans wondering what will happen next.
According to the New York Times, President Trump is likely to nominate a successor in the coming week, even in the face of opposition from Democrats. So, too, Senate Republicans are “weighing whether they have the votes to confirm his choice before the Nov. 3 election.”
Right now, the president’s top pick seems to be Amy Coney Barrett, who is currently serving the 7th U.S. Circuit Court of Appeals in Chicago. Barrett received this position from President Trump in 2017 and is now rumored to be his “favorite pick” to fill the Supreme Court Justice position.
According to NBC News, “Barrett, 48, was on the shortlist in 2018 to replace retiring Justice Anthony Kennedy,” when Trump selected Justice Brett Kavanaugh instead.
Barrett graduated from Notre Dame Law School and began her career in 1998 as a clerk to Supreme Court Justice Antonin Scalia. According to Reginery29, she has been called Scalia’s “ideological heir,” as she shares his conservative beliefs.
Barrett is known to strongly oppose abortion and is highly critical of Obamacare. She is noted as telling Notre Dame’s magazine that “Life begins at conception” (Refinery29).
Them.us reports, “Two years ago, Lambda Legal joined the National Center for Lesbian Rights, Trans Law Center, GLSEN, PFLAG National and 22 other LGBTQ+ organizations in opposing her [Barrett’s] potential Supreme Court nomination.”
Meanwhile, Barrett has been endorsed in the past by anti-LGBTQ+ groups such as the American Family Association and the American Principles Project, which both supported her Supreme Court nomination in 2018 (them.us).
Barrett’s nomination may also face controversy due to her and her family’s affiliation with the People of Praise, an “ecumenical Christian group which was founded in South Bend, Indiana in 1971” (Refinery29). This group and others like it are said to have been Margaret Atwood’s key inspiration for her dystopian novel “The Handmaid’s Tale.”
According to Refinery29, Atwood has alluded to the group but never named them specifically in numerous interviews.